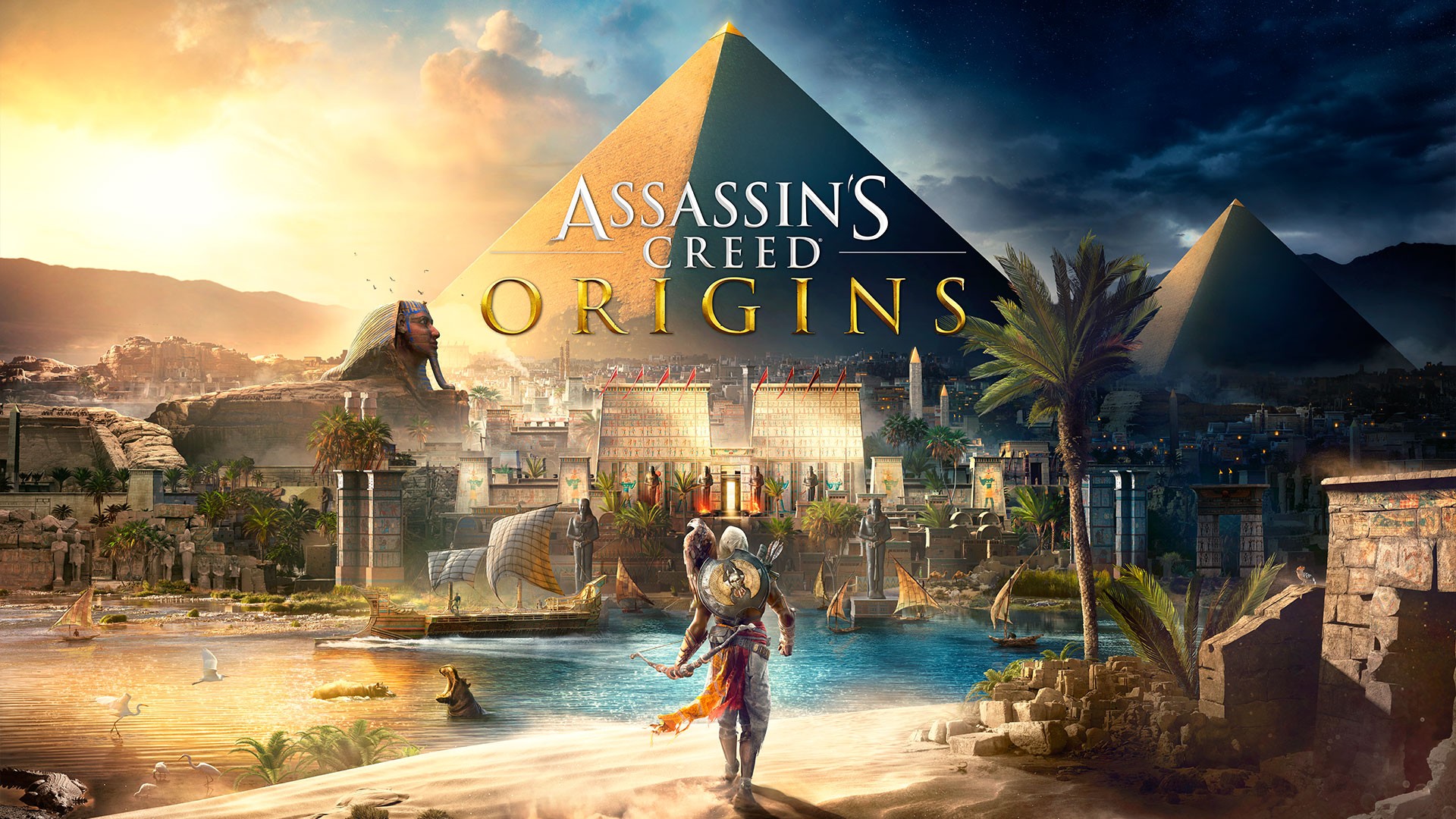 As Assassin’s Creed games go, this is the biggest yet, with an almost overwhelming amount of features, from crafting, upgrading, side missions, but best of all the ability to take control of Senu the eagle. Set during the Ptolemaic period of Ancient Egypt (48BC), the franchise goes far back in time, to a world of temples, pyramids and sand dunes. This newest instalment has been praised as being one of the best Assassin’s Creed games yet, with a very different combat system from the main franchise.

Welcome back…to the beginning. We are transported to Ancient Egypt’s pyramids and start the game off exploring a tomb that goes far underground. Magical stingers glitter as we search the area for riches and secrets, skating down coins into the depths of the tomb. There are many opportunities in the game to explore inside pyramids, caverns and retreats, hiding many of Egypt’s lost and loved ones, as well as the search for lost Papyrus scrolls. We mostly navigate in the dark by our own torch light. It feels and sounds ominous yet enigmatic, with faint winds blowing through the long corridors and the echo of our own footsteps. 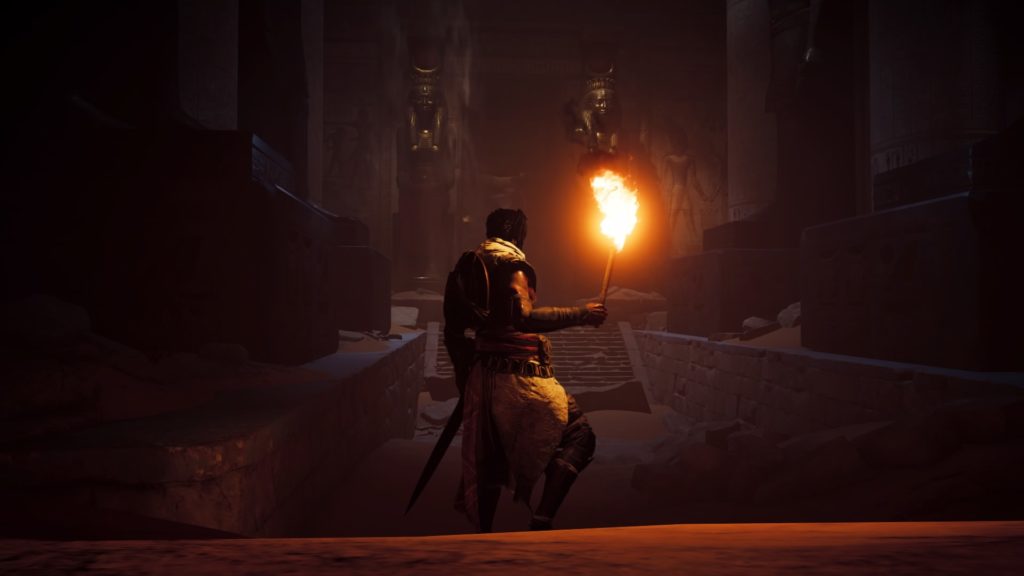 As we reach surface level again, we can hear the difference as the outside world comes into sharp focus, with sandstorms brewing and blowing and soldiers conversing while on patrol. Camels and horses are both available as mounts and everything about their sound design is right. Horse gallops are satisfying (especially the thunder of 20 horses in the chariot racing!) and never feel repetitive, along with the animal’s protests if you try to ride them up cliff faces. The thud of our own footsteps in the sand feel heavy and powerful and the clinks of our weapons presence never go amiss.

The world map in Assassin’s Creed Origins is absolutely massive, with each environment having different sound palettes. The sound I most noticed was the crickets chirping, as I had to turn to my right to check that the sound wasn’t actually coming from my living room. The placement of sounds in some parts really come alive, away from the screen, but it also becomes somewhat obvious that the location of these sounds don’t move around as Bayek explores. It’s almost as if the audio backdrop is created in your living room, but the ambience doesn’t necessarily have any real location in your surroundings (in the game). Objects like bushes, trees and people of course react to what you do but I think a little variety in the location of specific sounds in the ambience could have added to the experience.

The franchise is famous for its use of the Animus to relive the experiences of ancestors, however this barely plays a part in Origins at all. While there is a modern day “storyline”, we spend almost no time at all there and there is not much to explore sonically either. We have a laptop to research files from previous subjects and there is a nice processor ambience of the hard drive running with ticking/processing sounds low in the mix that feels very realistic. The sounds of wind from our camp come through occasionally, but that’s about it really. Compared to previous games, there’s very little to achieve/explore in the present day. 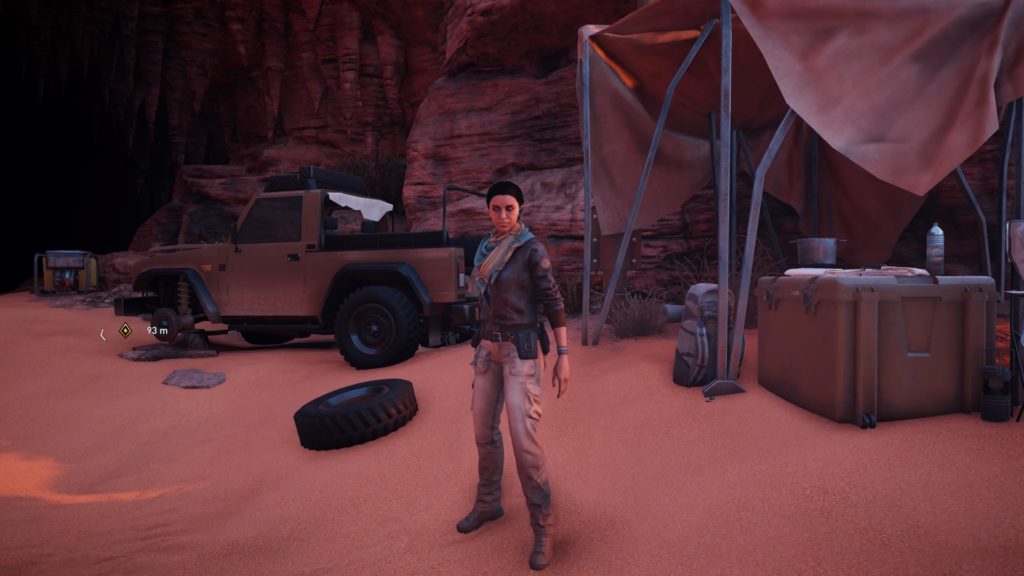 When it comes to Ancient Egypt, nobody really knows exactly what music sounded like, so it gave composer Sarah Schachner a little bit of free reign to be creative with the soundtrack. Sarah previously collaborated on Assassin’s Creed titles Unity and Black Flag, alongside Brian Tyler and Chris Tilton, and now was able to lead the score for Origins. She said she wanted the soundtrack to be moody and mysterious, relating back to Jesper Kyd‘s work. The music also achieves a combination of Ancient Egypt but accessed through the modern day, allowing the more sci-fi elements to shine through. This is achieved through many instruments including the oud, lyres, bells and wind instruments, all performed by Schachner herself, and then processed and combined with lower levels of drones, distortion and synths. Her music takes elements of Kyd’s work but brings them forward into a different setting and time. 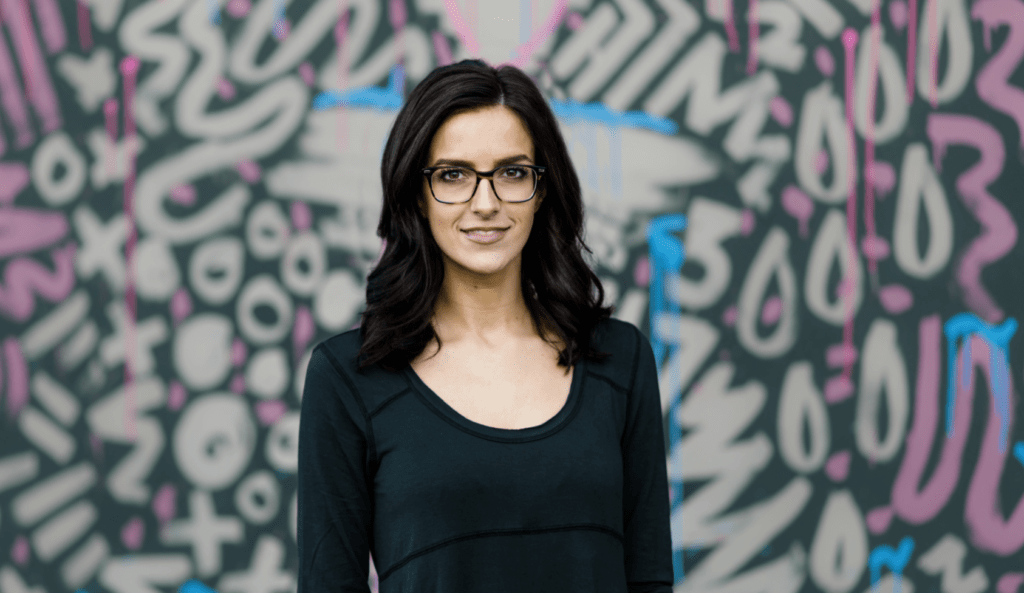 The implementation of the music is done pretty nicely, it’s never overpowering or bombastic, instead it becomes part of the ambience in places or stingers are used to draw our attention to something happening in the game. Mystical melodies drift in and out against a subtle backdrop of stringed instruments, percussion, and the sounds of the desert. Every so often, a hint of the original Assassin’s Creed motif (heard in Ezio’s Family) will be teased as the game builds, reminding us we are still part of the same world.

While wandering Egypt, Bayek comes across a great number of different people, including dancers and musicians. There’s a point in a temple where a lady is shaking a “Sistrum” (traditional Egyptian instrument, designed to shake or rattle bells) from left to right and I noticed how the sound of it was synced well but also sat perfectly in the mix, as part of the music and ambience together. There’s not really any criticism to make of the music, it achieves everything that Schachner set out to accomplish and more. With such a long playtime  for the title (30+ hours just for the main quest), the only thing to make it better would be more of it.

Main character Bayek, voiced and acted by Abubakar Salim, is a huge presence from Siwa who seeks vengeance with every step he takes, but also has a soft spot where his love Aya is concerned. Salim describes his journey as more of an internal, personal journey rather than a complete character change over the course of the story. A dialect coach and historian worked with the actors to try and decide on accents, as well as using Egyptian words in places. Small details such as Bayek not rollings his ‘Rs’ like the Greeks were important in creating his voice in contrast to other characters in the game.

Unlike the tradition in many games to not have voice actors together, Salim and his co-assassin Aya, played by Alix Wilton Regan, had a lot of sessions (including mocap) together so had each other to play off of for many scenes. 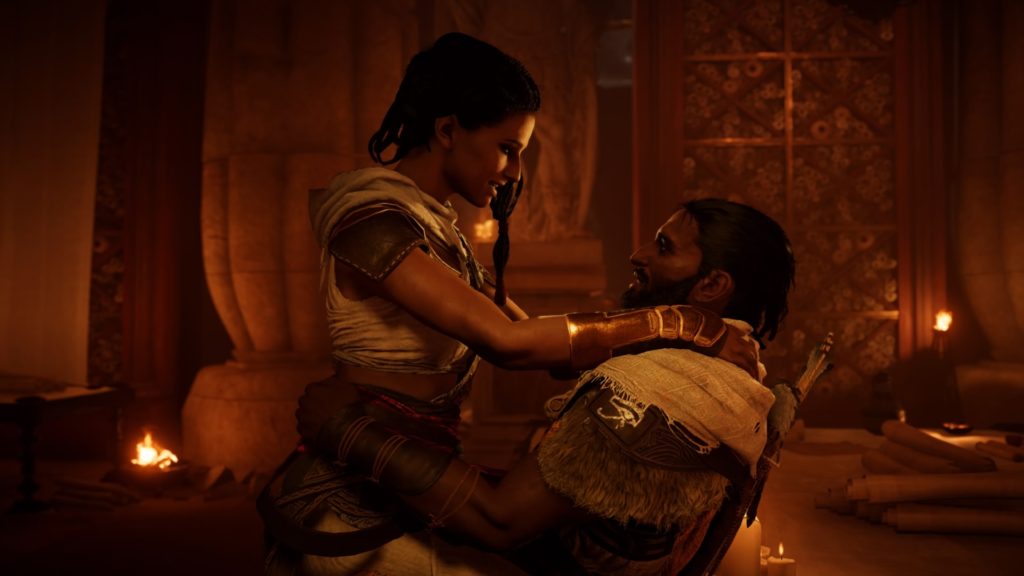 Aya is a fearsome companion and lover to Bayek, although we get less time to play as her and can’t choose to switch to her, we get to live out a small portion of her memories. Their interactions on screen always seem genuine as their lives touch before then separating again as they each follow their own path. Both actors do a good job of making them sound like birds of a feather. Aya’s gentle side is only seen while she’s with Bayek and she becomes more instrumental in pushing the creed to go further and be colder, more calculated killers.

There is an incredible amount of voice talent in this game when it comes to all the non-playable characters scattered all over Egypt. Everywhere Bayek walks there is conversation, order tramadol online prescription with so much detail in the exchanges between people; anything from prayers, to welcoming Bayek back after time away from a certain town or village. While most is in the local language (English in this case), there are also random people who might be passing by or have something to say if you bump into them in other languages (presumably Egyptian). It’s quite a nice touch as it makes it feel authentic, as if we are really in Egypt.

Overall, the latest Assassin’s Creed doesn’t disappoint on too many levels. On a purely sonic level there’s really nothing that could be done much differently, it’s a really solid audio experience that encapsulates the birth of the creed amongst the pyramids of Ancient Egypt.