Grim Fandango, Diablo, World of Warcraft, StarCraft, Ori and the Blind Forest, and Heroes of Might and Magic – performed live in Wroclaw, Poland

Two days, four concerts, workshops, meetings with composers, and panel discussions. The details of the first edition of the Game Music Festival in Wroclaw, Poland, have been unveiled. During the 26th and 27th of October 2018, a total of several hundred musicians will appear on the stage of the National Forum of Music.

The Symphony of Heroes concert will open the Festival. The score performed by an 80-person NFM orchestra represents magnificent music composed by Paul Anthony Romero. The opus consists of three symphonic suites – each of them presenting music from one of the games of the Heroes of Might and Magic series. The first suite includes music from HoM&M II, the second suite contains fragments of the Heroes III soundtrack, and the last suite comprises of songs heard in the fourth part of the game.

On the same day, during the evening gala, the artists will perform The Jazz of Grim Fandango – a tribute performance to Grim Fandango, the extraordinary adventure game which celebrates its 20th anniversary this year. The main hall of NFM will host the top jazz tunes composed by Peter McConnell and performed live by the exquisite Bartosz Pernal Big Band. This event is officially presented in cooperation with Disney Interactive and Double Fine Productions. Furthermore, Peter McConnell himself will be present during the event.

The second day of the Game Music Festival will begin with the magical sounds of Ori and the Blind Forest. The elaborate work of art named The Symphony of the Forest will take the audience to the world of sophisticated music composed by Gareth Coker who will also personally appear in Wroclaw. It will be the world premiere of this soundtrack performed live in such a rich form.

The fourth concert of the festival will be The Symphony of the Storm, a monumental opus consisting of three suites: the first – devoted entirely to the Diablo series, the second – presenting melodies from the World of Warcraft franchise, and the third – containing works known from both parts of StarCraft. The symphony will be performed by a full orchestra and the choir of the National Forum of Music; altogether over 120 musicians on the stage. The work combines music from many titles, created by multiple composers over the years. One of them will come to Wroclaw – Neal Acree will take part in the festival personally.

The Game Music Festival organisers say that the idea of the festival is not only to give fans the opportunity to enjoy live music form their favourite games in acoustic versions, but also to gather composers and audio professionals of the video game industry. They want to create a common space for workshops, lectures, and discussions: “We focus on the highest artistic quality, that is why we decided to cooperate with the National Forum of Music which has one of the best philharmonic halls the world in terms of sheer acoustics. Thanks to this, we can provide the performances without any electronic amplification. We really want the festival to be also an educational event, where fans can get acquainted with the process of making music for games. Furthermore, we want GMF to be of a forum for meetings of experts, sound designers, and composers working in the gaming industry” – gamemusic.pl

The venue:
The Witold Lutoslawski National Forum of Music (NFM) is an impressive edifice located in Wroclaw, Poland. The perfect acoustics of its concert halls put it among buy antibiotics cats the very best objects of its kind in the world. Moreover, the concert halls have innovative systems for programming acoustics, including the shifting ceiling in the main concert hall and an air margin encircling it, allowing to control the length of reverberation.

The artists:
The music will be played by The National Forum of Music Orchestra. The NFM Orchestra was founded in 1945, and since then it has been delivering dozens of unique projects, also promoting Polish music around the world. Beside the NFM Orchestra, there will be more performers on the Festival’s stage, including the NFM Choir, Bartosz Pernal Big Band, and many soloists.

The score:
Unique musical scores were written for all four concerts of the Festival. They were created by several composers and arrangers, including Jan Sanejko, Aruto Matsumoto, and Bartosz Pernal – all of them being brilliant and very talented composers of the young generation.

The tickets:
The price range of tickets for this event starts from 69 PLN and rises depending on the location of the seat. Special tickets, enabling the attendee to enter the meet & greet session with a composer, start from 179 PLN. Combined passes for all festival concerts start from 499 PLN. Strictly limited VIP vouchers are also available – they include meetings with all composers that will appear at the festival, as well as entry to accompanying events. All tickets are being sold online at gmfest.com. 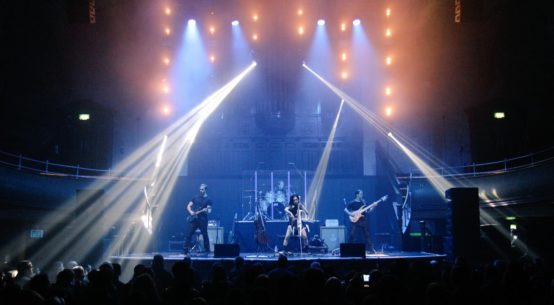 Game On! Tina Guo Rocks The Round Chapel