Developer: From Software and JAPAN Studio

Originally released way back in early 2015, Bloodborne (From Software) has recently been made available for free (with a subscription) to console gamers all over the world as part of the Playstation Plus initiative. With the arrival of new players has come a reigniting of the joy in those of us who played it upon first release. In a great display of positive player spirit, the online multiplayer community joined forces to cooperatively play thew game throughout the early months of 2018, helping new players to become initiated. With all this in mind (and not forgetting my own 200+ hours of dedicated game time with Bloodborne), now seems like an ideal moment for a retrospective; looking back at the audio that made Bloodborne one of the highlights of my year. I shall also be discussing the 2016 DLC – The Old Hunters, an important expansion that managed to bring new weapons, music, sound, bosses and environments into an already rich world.

The music in Bloodborne is definitely the highlight of the game’s audio for me. It features a notable cast of established, internationally collaborating composers. This included Ryan Amon, Cris Velasco, Peter Scaturro, as well as Tsukasa Saitoh, Nobayoshi Suzuki and Yuka Kitamura from the sound team at From Software. Although the sound design creates an eerie atmospheric soundscape for the game world itself, the music combines a harrowing choral section with jarring brass and sharp stabbing strings. This combination of instruments is both representative of the Victorian themed setting and gives every boss encounter an epic and daunting presence. This intense impact also draws from the fact that much of the game doesn’t feature any music outside of the game hub area and (most importantly) the boss battles. The effect is that, when these moments do occur and the music bursts in, a startling juxtaposition is created that really hits home during gameplay. 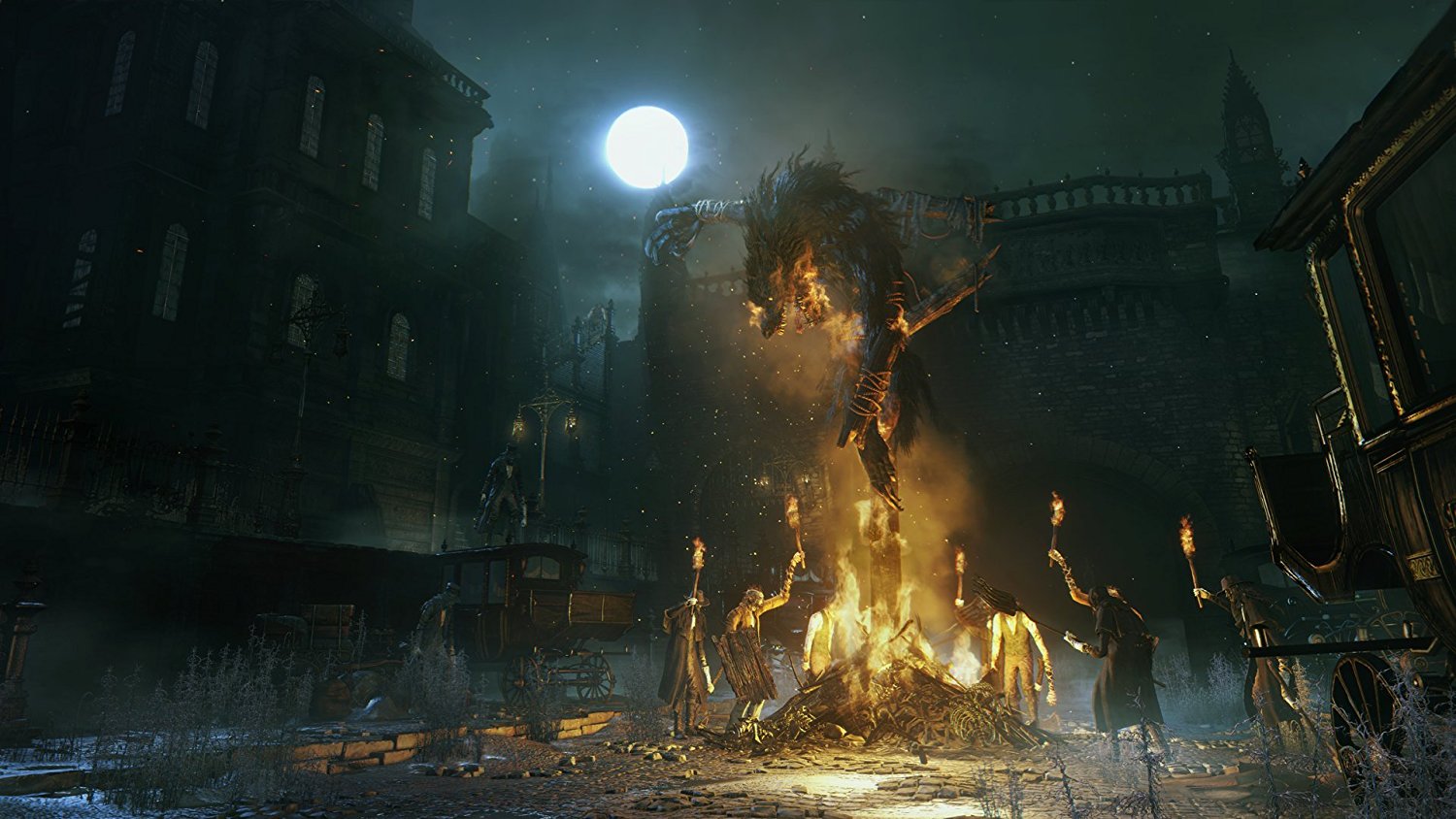 Fig A. One of the first sights you see in Yharnam.

The first boss that you can potentially encounter in Bloodborne is the Cleric Beast. This optional boss leaps over a rooftop into the arena, towering over the player character to a musical accompaniment beginning with an intense, scene-setting choral section followed by an action packed score racked with fast paced rhythms. This is the first time the player will encounter any music within the game outside of ‘The Hunter’s Dream’ (the hub area theme). It powerfully enforces the importance of the boss battle and highlights how the odds are stacked against you from the very beginning.

The music from the hub area ‘The Hunter’s Dream’, in contrast to the battle music, is soft and unassuming, yet uneasy. This gives the sense that the player is never truly safe even in the Hunter’s Dream, almost foreshadowing events that occur later in the story. The overarching themes of Lovecraftian horror and mortal struggle are represented musically throughout by this unrelenting sense of unease, particularly through the persistently discordant harmonies, that ensure the music never offers the player any sensation of victory. Suffering builds character.

The Old Hunters DLC uses music much in the same way as the original game, typically only being used in boss fights and cutscenes. Even the haunting areas of the fishing village and the dark caverns, where you find a second in-game Blood Starved Beast, rely primarily on environmental sounds as a means of generating atmosphere. 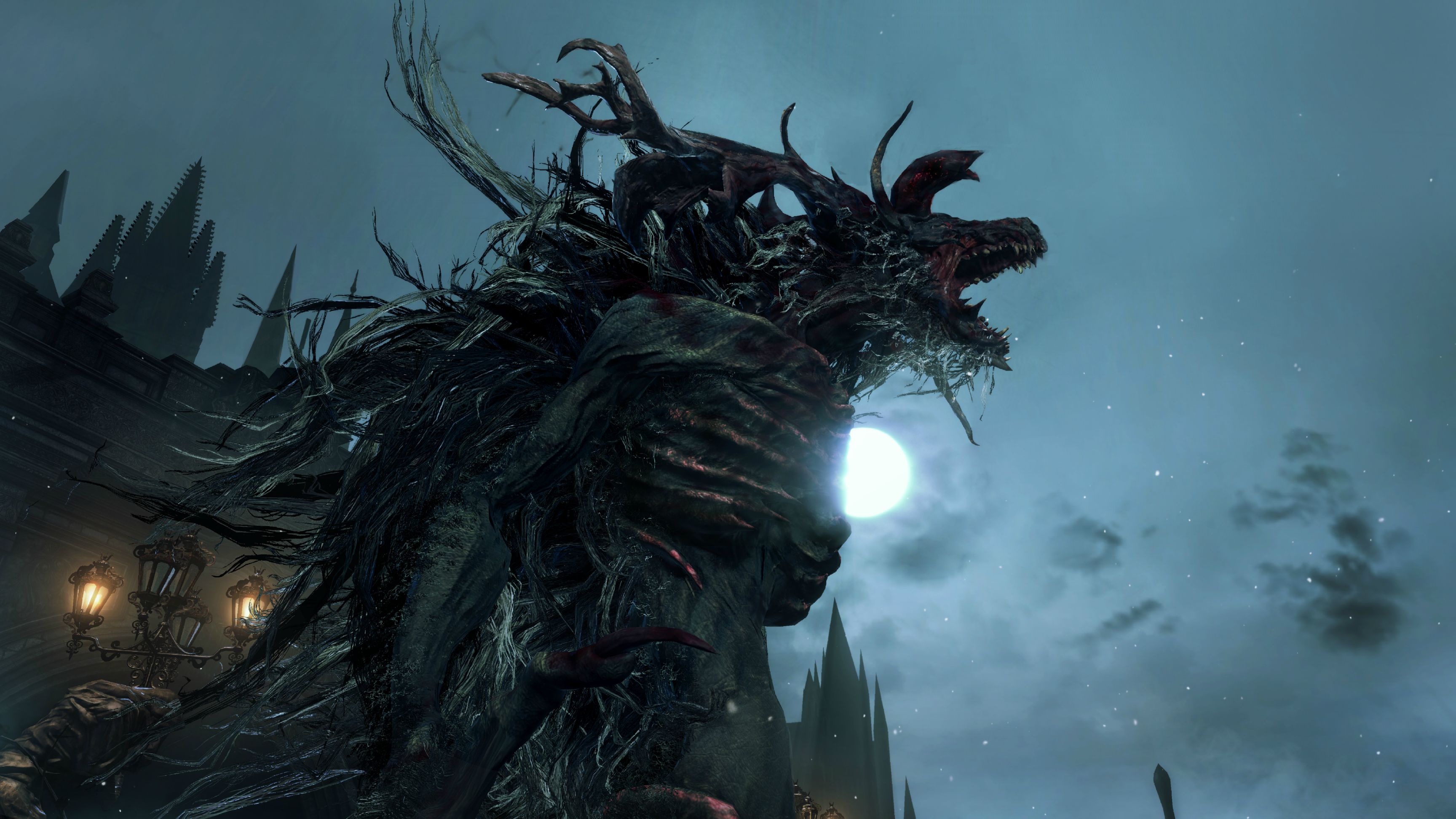 Fig B. The Cleric Beast arriving into the game.

Bloodborne boasts some fantastically crafted sound design. The game makes imaginative use of a variety of sources to create sound effects for its transforming trick weapons. Turning a sword into a giant stone hammer, a long mace into a giant circular chainsaw or even a gentlemanly cane into a whip threaded with vicious shards of metal (similar to something you’ve likely seen in Soulcalibur) are all emphasised with unique and satisfying sound effects.

You can tell that From Software’s sound department took special care with the weapons in the game, as well the harrowing sound effects for the boss monsters, which howl with something akin to anguish and despair (great examples of this being Vicar Amelia, The Cleric Beast and The Orphan of Kos). That said, while such great attention to detail was taken with the weapons and boss monsters, the overall foley for the characters is somewhat lacking. For example, although it is possible to spot the audio change that occurs when the material of your armour is swapped, the sound design for movement and rolling is overall rather repetitive. 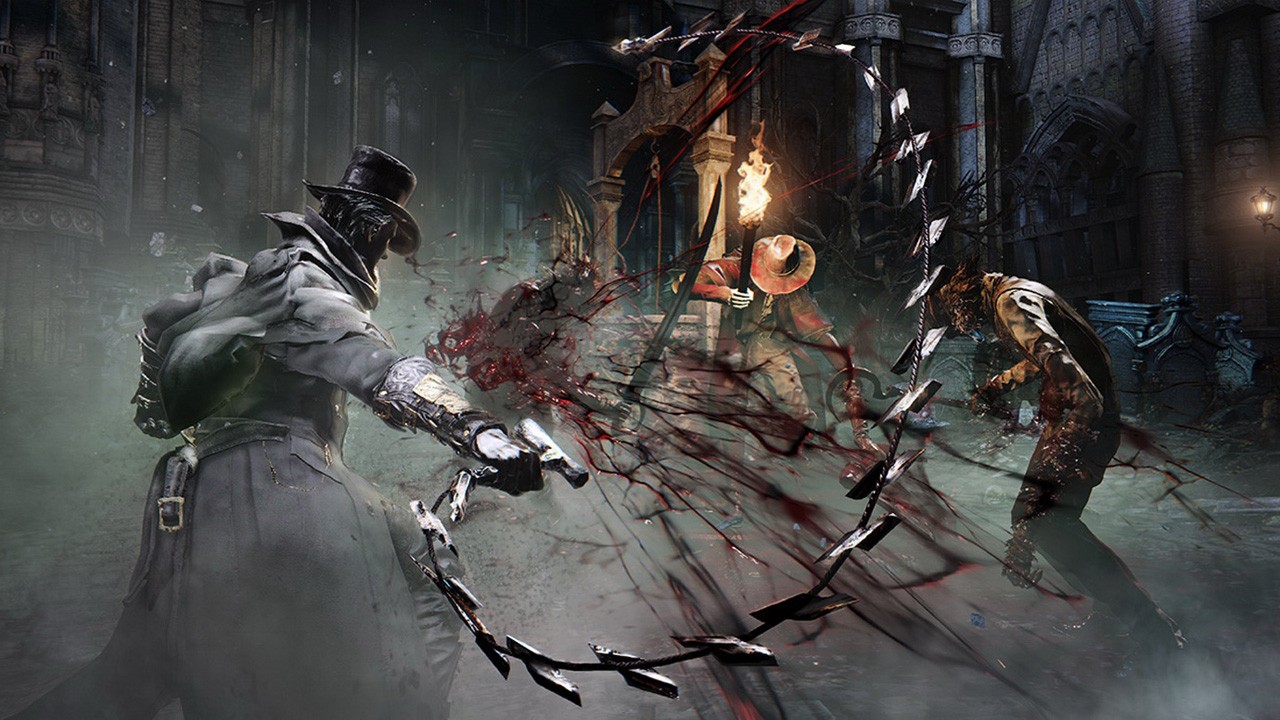 Fig C. One of the starting weapons, the threaded cane.

The above criticism is mostly valid for a lot of the less combat-focused sound design throughout the game and some elements of the battle sounds such as the viscous, ludic sound used for visceral attacks. Although the atmosphere within Yharnam is suitably drab and dreary to match the gothic Victorian aesthetic, the sound design for the smashing of pots, rolling, the triggering of levers and the hitting of enemies is deeply repetitive. Of course, such an issue is probably more noticeable to a sound designer, but as a player it is arguably less of an issue due to the game’s intense difficulty and the likelihood that the player will be more focused on performance and less sensitive to breaks in immersion.

Considering that most of Bloodborne’s dialogue (other than boss monster’s dialogue) is optional and can be missed by the player basically running past non-playable characters, it’s not exactly a highlight of the soundscape within the game. That said, there are a couple of positives here. There are plenty of well-crafted dialogue trees that can be directly interacted with or triggered through specific gameplay behaviours, so the voice acting/dialogue is certainly well implemented. However, the voice acting for non-playable characters is not particularly strong by any measure, with the exception of the various English and Irish accents that do sound authentic (well… all the characters except for Eileen the Crow, who comes across less Yorkshire and more struggling-with-her-accent, as shown by her ‘Hoonter of Hoonters’ pronunciation).

By contrast, the dialogue of the human-esque bosses is certainly more well rounded and better acted. In particular, Ludwig’s dialogue within the DLC and Micolash’s dialogue from the Nightmare Frontier is a highlight of that encounter (until you die fifteen times and can recite it word for word…). A special positive mention goes to the cutscene voice acting that transitions the player to DLC from the base game (and when you complete the DLC). This has particularly well acted monologues that also give hints to the cryptic story. As the bosses are such a central aspect of the game, the voice acting overall is good and feels authentic. Of course, most of it is easily missable unless you know what you’re doing in a From Software game. 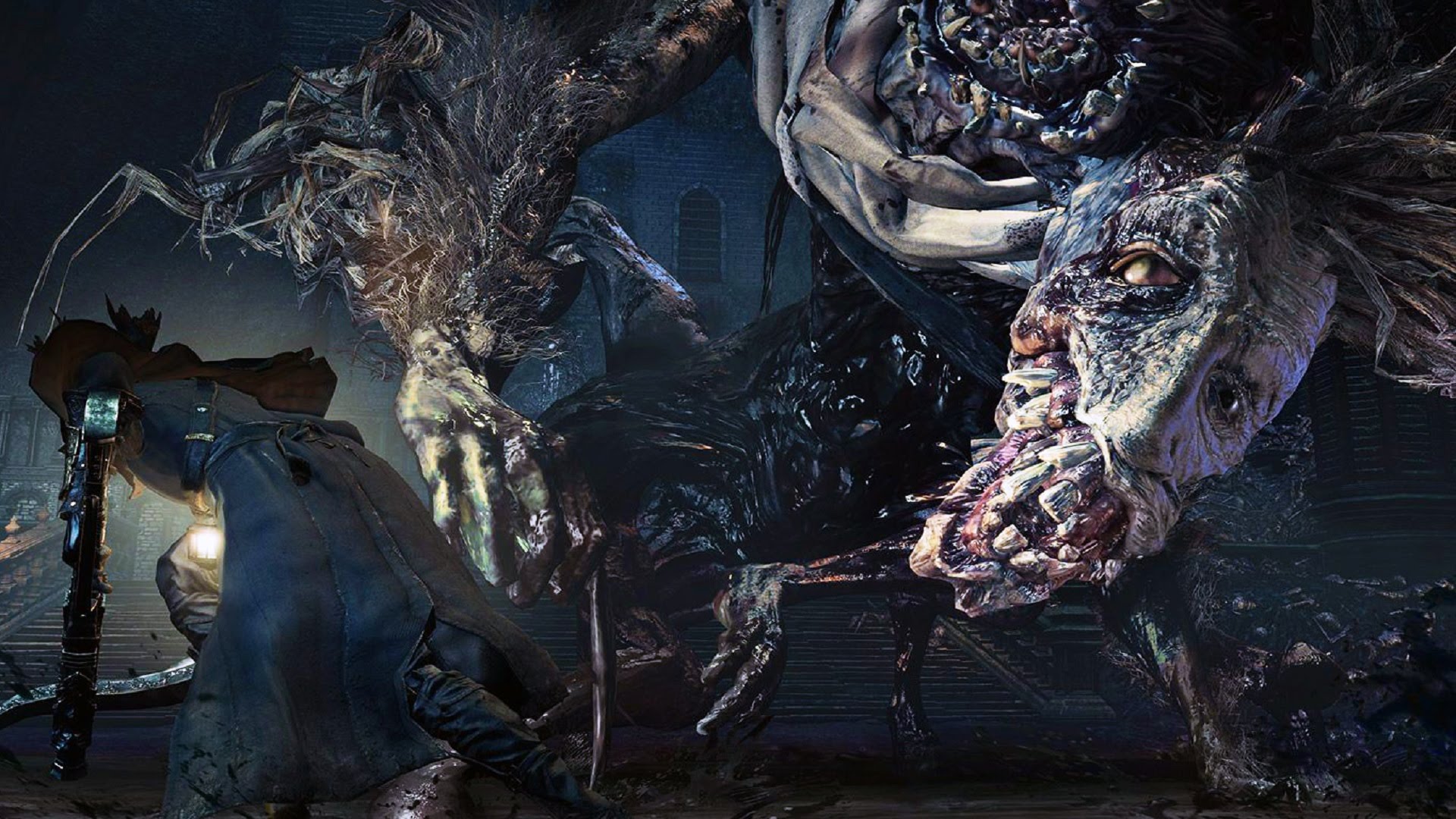 Fig D. Ludwig, one of the bosses from the DLC, whom has the most dialogue.

Bloodborne is an enjoyable experience that you can lose yourself in, even if it’s only enjoyable in a sadomasochistic sense (and I say “lose yourself” as in lose your sanity upon hearing the same boss dialogue fifty times…). The sound design and voice acting give the impression of a tangible world around you, whilst the music can effectively propel you into both excitement and unease when you come across a boss. A lack of variety in the sound design is an issue and the game would benefit from more procedural sound design techniques, but overall the audio for this project is fantastic and if you like a challenge then make sure to pick it up! 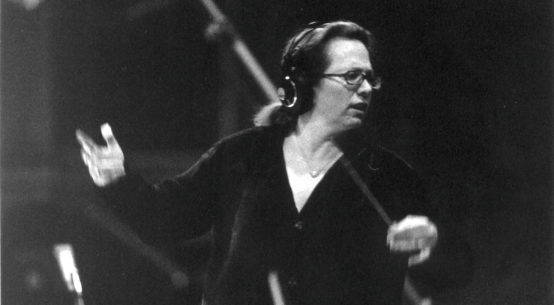