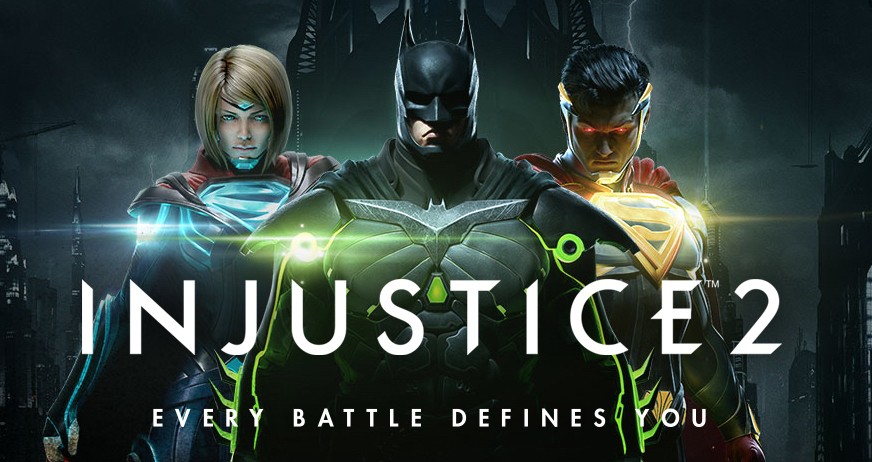 Welcome to the Multiverse of Injustice 2! One of the most popular series in the fighting genre; thanks to its vibrant characters, the current popularity of the Super Hero genre, and the success of the series’ flagship title, Injustice: Gods Among Us. Developed by NetherRealm Studios (Mortal Kombat X), it is no surprise that Injustice 2 stands strong alongside games such as Street Fighter IV and Dead or Alive 5: Last Round.

While the game visually offers a variety of well-designed platforms in which to fight, as well as a selection of aesthetic upgrades for characters, it is the audio and writing that really gives life to the game. Injustice 2 boasts a story that is both dark and gritty in places, similar in ways to Christopher Nolan’s The Dark Knight Trilogy and Zack Snyder’s Man of Steel and Batman v Superman: Dawn of Justice. The audio for this game supports these dark themes, while also empowering the player through a focus on sound design and Foley.

As a martial artist, game audio practitioner and Super-Hero-Super-Fan, I am excited to be covering this game; Injustice 2 falls into a conglomeration of three of my biggest passions! But with no further ado, let’s look at the game audio of Injustice 2 and talk a little shop.

Injustice 2 brings us the return of Christopher Drake as lead composer, a film and games veteran who cut his teeth working on the graphic novel inspired works Hellboy Animated: Sword of Storms and Hellboy Animated: Blood and Iron. Christopher further developed his signature sound working within the DC Animated Universe on popular titles such as Batman: Year One, Batman The Dark Knight Returns, Justice League: Doom, and Green Lantern: Emerald Knights, cementing his role as a composer for dark, gritty comic films/games. According to Drake “NetherRealm reached out to [him] based on [his] work with the DC Animated Films”. Alongside Drake, additional music is also provided by Rich Carle (Audio Director as NetherRealm), renowned Mortal Kombat series composer Dan Forden, as well as Tilman Sillescu and Alexander Röder from Dynamedion.

The music provides a basis for the worlds of Injustice 2, over which the star-studded cast of voice actors and powerful sound design interplay. While complimenting the visual styles of each level’s design through choices in instrumentation, the music is able to remain homogenous with the current ‘meta’ of composition for super hero games/films. The music in this game is highly enjoyable and effective, especially during cut scenes and special attacks; it almost fades into the background during gameplay, taking second place to the VO/Foley and sound design. 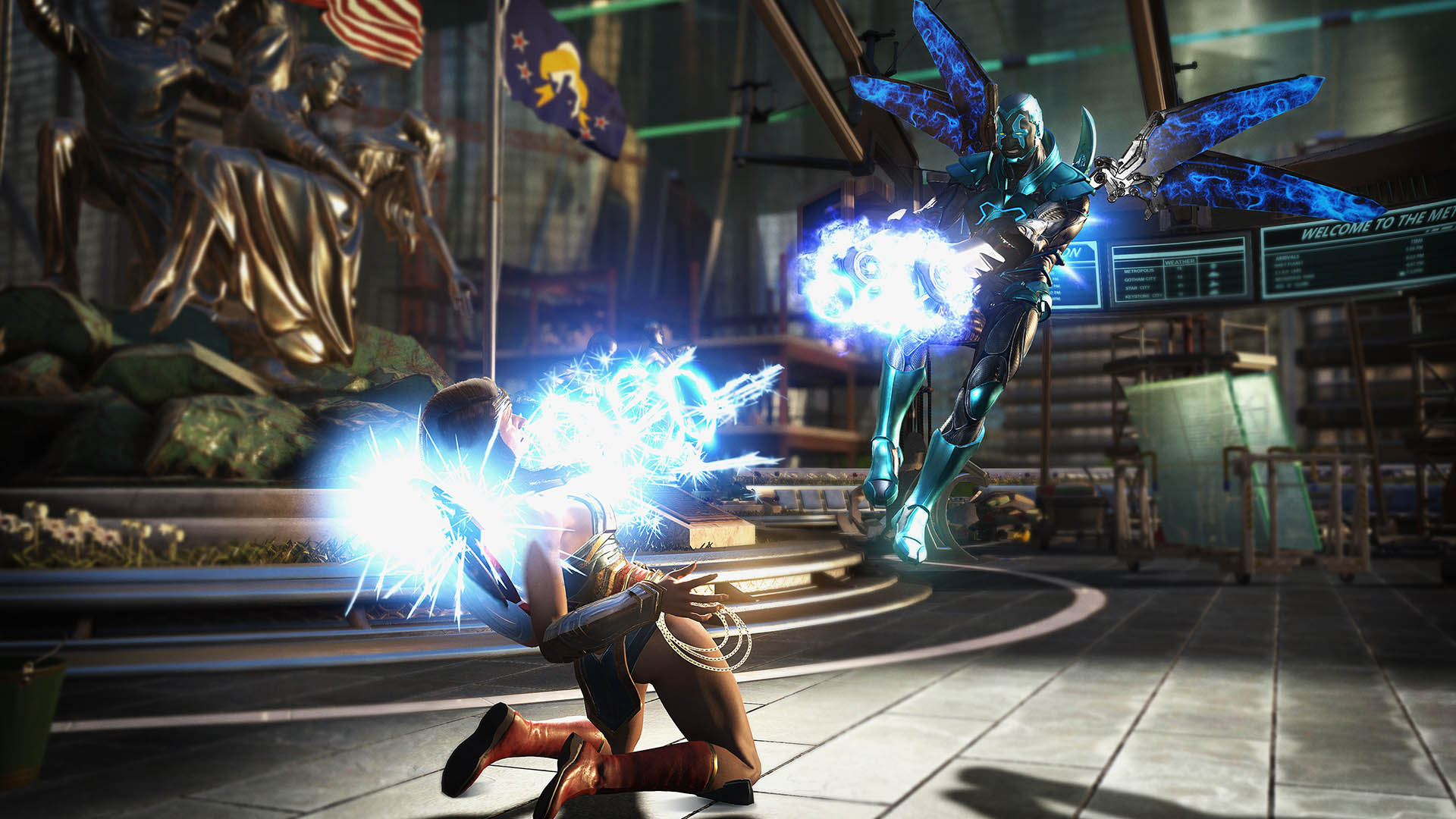 While I thoroughly enjoyed the music in this game, although I have only played around 8 hours of it myself, musical transitions can sometimes be slightly jarring. One example of this is when you are queued for single player missions, the game will wait for you to click X to proceed to the fight, but will instantly fade the music out after you press the button. Whilst this shows how the game reacts quickly to the player’s input, the cutting off of the music is a little noticeable at times.

One of the strengths of the music is that when you use a character’s special attack, the background music seems to drop out of the mix for a moment, to allow other musical elements to support the accompanying cutscene. This, in turn, can make your attacks feel much more meaningful and powerful. An example of this is the string elements that will crescendo to match Green Arrow diving from the air to kick his frozen enemy. This fade out of the music is also used well if by the end of the menu loop the player hasn’t yet decided what they’re doing, the game simply returns the player to the home screen. When this occurs, the music dies down to electronic elements to match the Watchtower’s super computer monitor. This makes the visual transition smoother, and makes the game seem knitted together well. 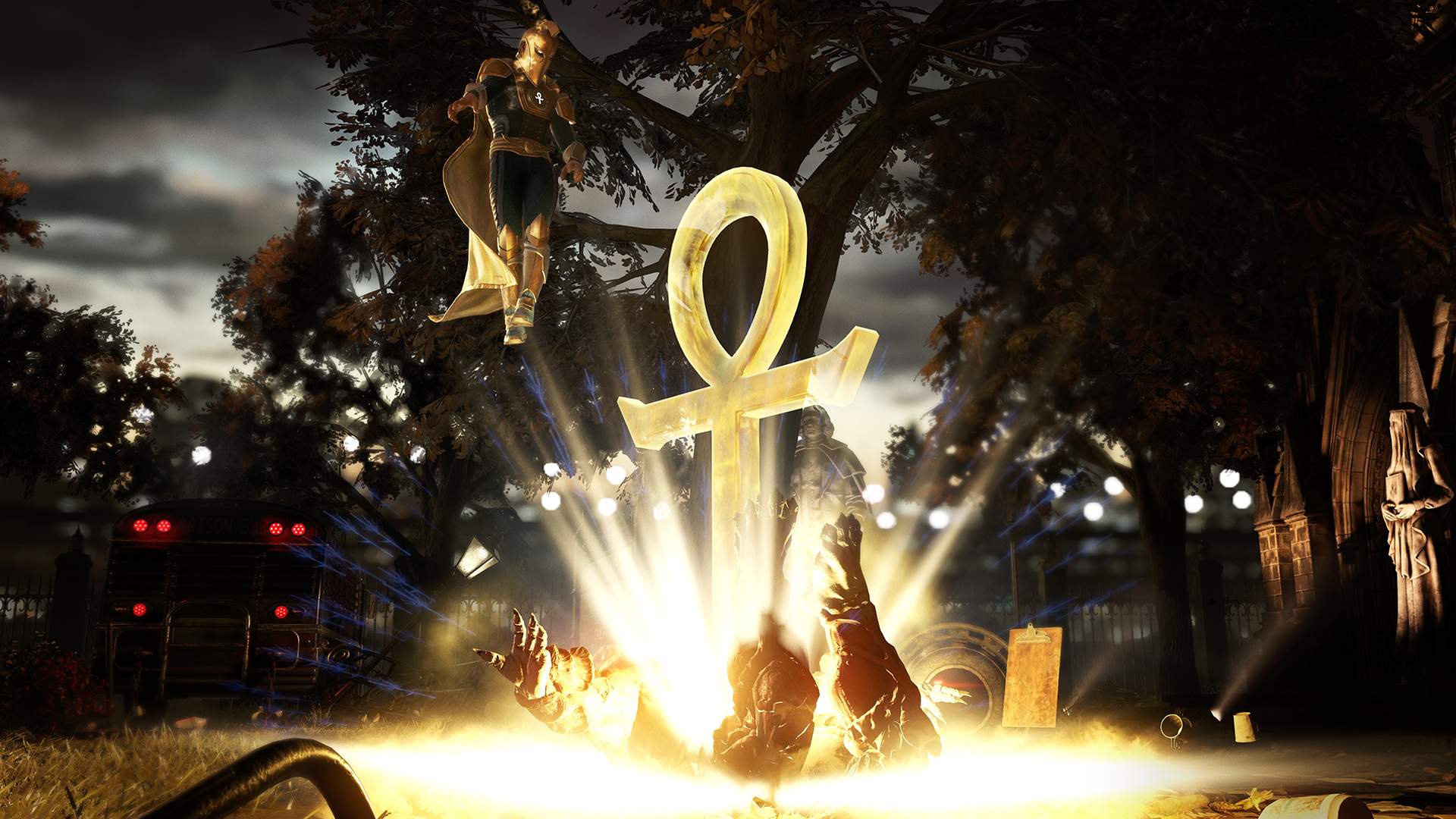 As mentioned briefly above, the sound design in this title does a spectacular job of empowering the player’s actions. The mix clearly falls in favour of sound design and voice over, without negatively impacting the music in any way. This means that the sound effects and dialogue are clearly audible at all times over the soundtrack. This is great playing as a beginner, as at first the game is very fast paced. Until you become more accustomed to the pacing of the gameplay, the focus on the sounds of yours and your opponent’s character can be extremely helpful.

The sound design also feels empowering when you strike your enemy as you hear a mixture of their grunts of pain, your grunts of exertion and the sound of the attack happening (which can be broken up into layers of weapons, clothing and Foley). The Green Arrow is a great example of this within Injustice 2. Although the sound of firing his boxing glove arrow is extremely hyperbolic (producing a sound akin to an explosion, rather than the thud of a leather boxing glove), it matches the amount of power striking the enemy, whilst making you feel successful for having hit the enemy with it at all! This sound design has a positive reinforcing effect, making you want to pull it off again and again. It makes you feel like you’re playing well and performing successfully. This is the same for most characters, such as The Flash’s special attack, Batman’s grappling hook combo or Superman’s laser eye beams. 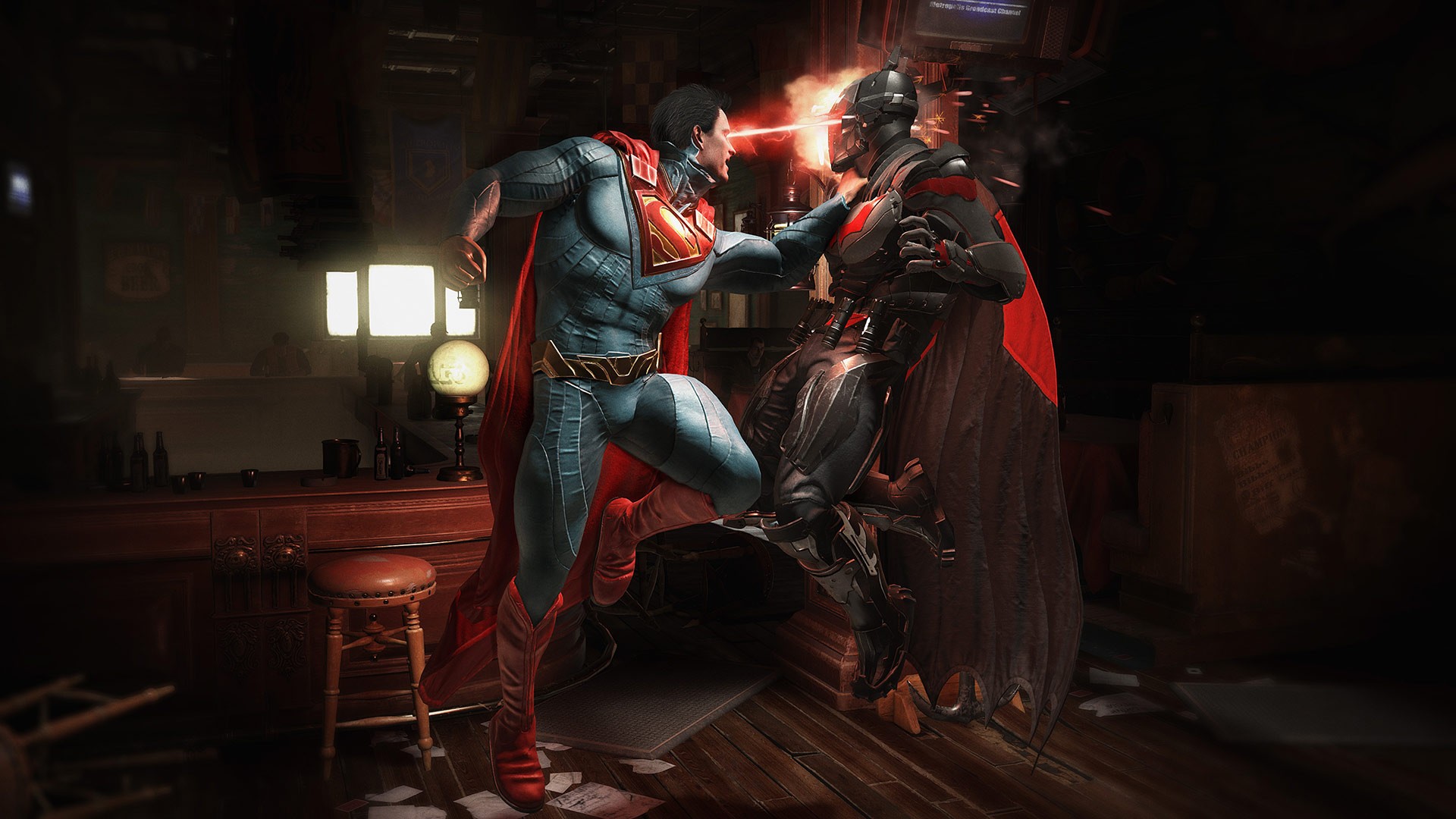 Now, as much as I love writing of the quips between the characters, their taunts and the general world building between them as they communicate, dialogue and voice-over is where most of my issues with the audio for this game lie. Don’t get me wrong, Injustice 2 has an incredible cast with the likes of Richard Epcar, Tara Strong, Steve Blum, Alan Tudyk and Laura Bailey, all of whom do a fantastic job of portraying and playing their characters with great effect! However, although I’m barely 8 hours into playing this game, the grunts, screams and general voice over effects for a lot of the characters have already become somewhat repetitive. Most players probably won’t notice so much, especially since the game seems to makes great use of Wwise (the audio middleware created by Audiokinetic). However, once you do notice, you can quickly pick up where the sounds are worked into their systems. The general grunts and screams do become repetitive, although not enough to be annoying, just enough to be noticeable.

Now this isn’t exactly a problem, it’s actually an interesting point of discussion surrounding the repetitive style of the gameplay of fighting games, as compared to the nurturing ability of Wwise to make sound systems less repetitive, but this is a review and it feels worth mentioning. Now, in order to explain this better, I think it’s important to establish that Wwise is well known for being a powerful audio middleware program. Wwise (much like Firelight Technologies’ FMOD Studio) is a tool that offers a wealth of versatility and provides variation to audio assets that are being used within a game, and it’s these options that give some creative freedom to sound designers and composers alike. Titles that make use of Wwise such as PeggleBlast, No Man’s Sky and Batman: Arkham Knight, are well known for having interesting and complex audio processing on their sound design creation and implementation. This is exactly what I mean by Wwise being a nurturing influence in game audio. It’s a piece of software that ‘nurtures’ the sounds, working almost symbiotically, to make the sounds work better within the non-linear context of a video game.

That being said, fighting games such as Injustice 2, Street Fighter V, Mortal Kombat X and Tekken 7 all have something in common: the gameplay is extremely repetitive. This is not a criticism of the fighting genre, but it’s important to accept that other than the odd non-fighting orientated level, most of the game play features a list of characters using the same attacks, in the same environments over and over. Bearing this in mind, once you start racking up the hours, working your way towards trying to be the World Champion of Injustice 2, the repetitive style of gameplay definitely has a narrow scope for variety in sounds. 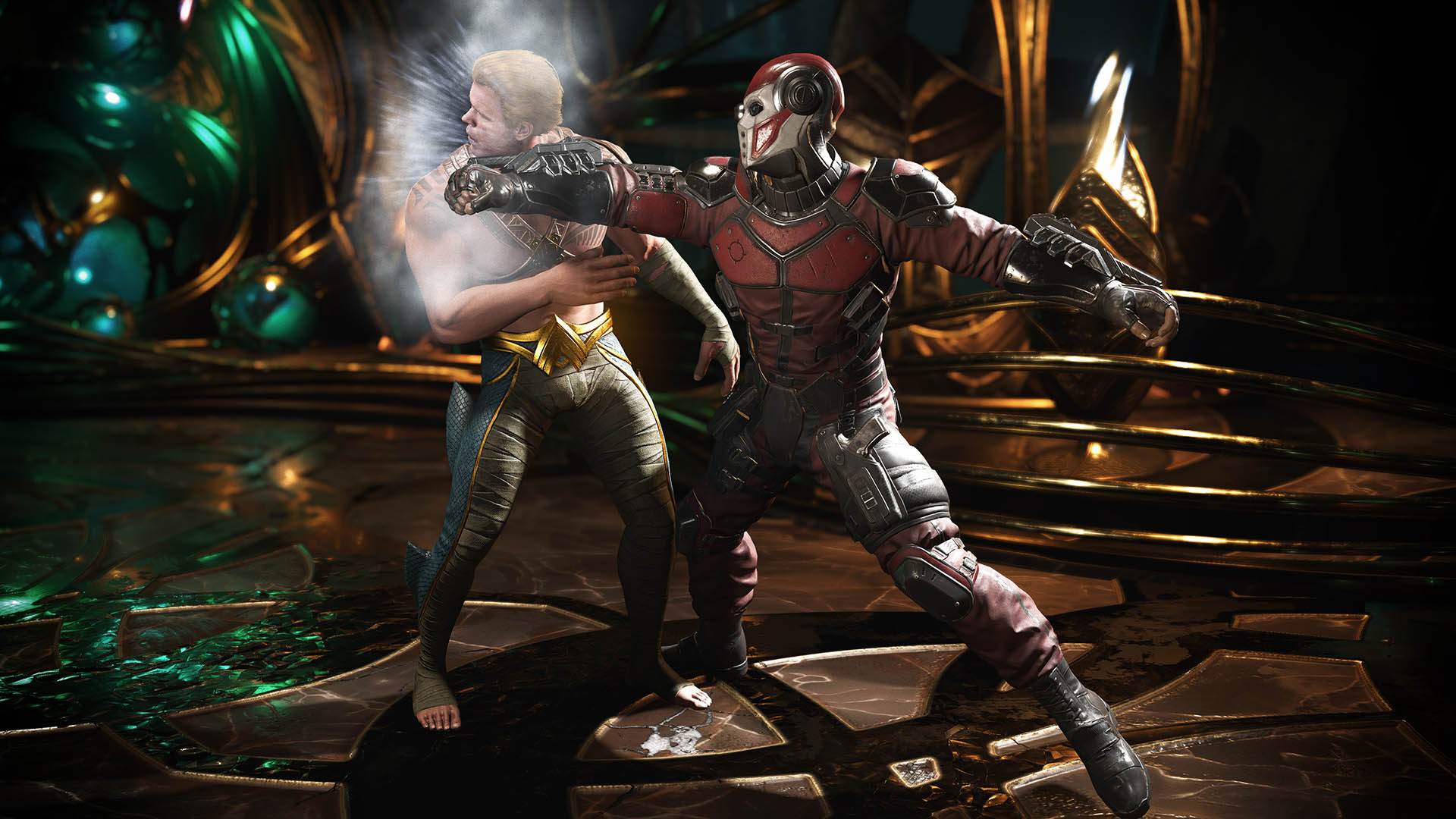 Bearing all this in mind, this is why I don’t think that the repetitive nature of the vocal sound effects, such as grunts are particularly bad, or noticeable. Wwise is an extremely advanced piece of equipment that offers huge possibilities to sound designers. Yet, I think that the potential repetitive nature of these vocal effects stems more from the genre of the game itself as opposed to any technical or creative decision by the audio team. The audio team for Injustice 2 is incredibly talented and for all of the reasons that I have explained above, they have done a fantastic job. Regardless of the versatility offered by Wwise, there is only so much you can do to nurture audio for a game in this genre.

Another interesting point worth mentioning is that a line from the first game seems to have been re-used in Injustice 2, and I can’t be sure if it uses the same audio file, but it’s definitely the same line of dialogue. Again, this isn’t exactly a problem, it’s likely a cost effective way to add some variety to the dialogue and to nod to jokes within the previous game, while building upon the verisimilitude of the world itself. However, being someone who studies these kinds of things, it does somewhat detract from the realism of the world. It draws you out of the immersion briefly as you remember that the same thing was said between the same two characters in the previous title.

Injustice 2 doesn’t fall short of its competitors by any means, and the music, sound design and dialogue are fantastic. Although there are a few issues with transitions between scenes or situations, and with some of the vocal effects, the game features great compositions, powerful sound design and a fantastic cast of voice actors who really lend life to the game. All in all, it’s definitely worth playing if you’re a fighting game fan, or just looking to mail order levitra online live out your super hero fighting fantasies! As I touched on above, there is a slight disparity between the nature of fighting games and the versatility of Wwise but overall the audio for this game is extremely effective, even if after another ten hours it might begin to grate on me! Unfortunately, it seems Wwise couldn’t really be used to it’s fullest potential in this context, however, the audio for this game is incredible nonetheless and I look forward to seeing what comes out of this studio in the future! If you get the chance, do try out Injustice 2, it’s definitely going to be keeping me busy this summer when I’m not training to become the English equivalent of the Emerald Archer! 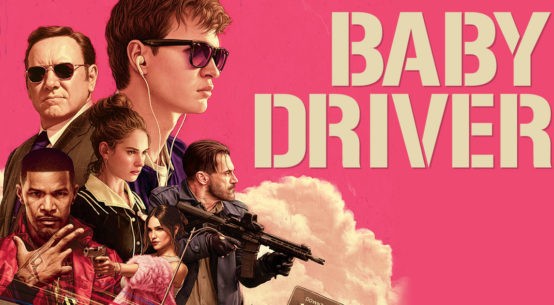