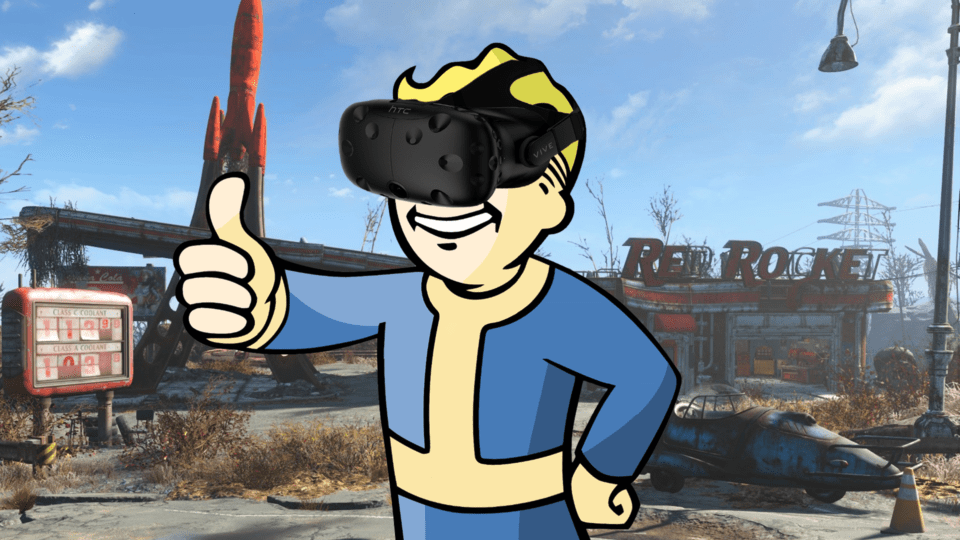 As of January 2018, Fallout 4 VR stands as the best-selling VR title to date and its popularity can partly be attributed to its prior success as a non-VR game. The Fallout franchise is definitely (alongside Borderlands – take note please Gearbox…) one of those series many players have thought “this would be awesome in VR”. Of course, having already been a non-VR game (and one for which the audio has already been expertly reviewed on this very site raises the challenge of discussing elements of Fallout 4 VR’s audio without repeating what’s already been said. Fortunately the game’s translation to VR has had a few key effects worth looking into. 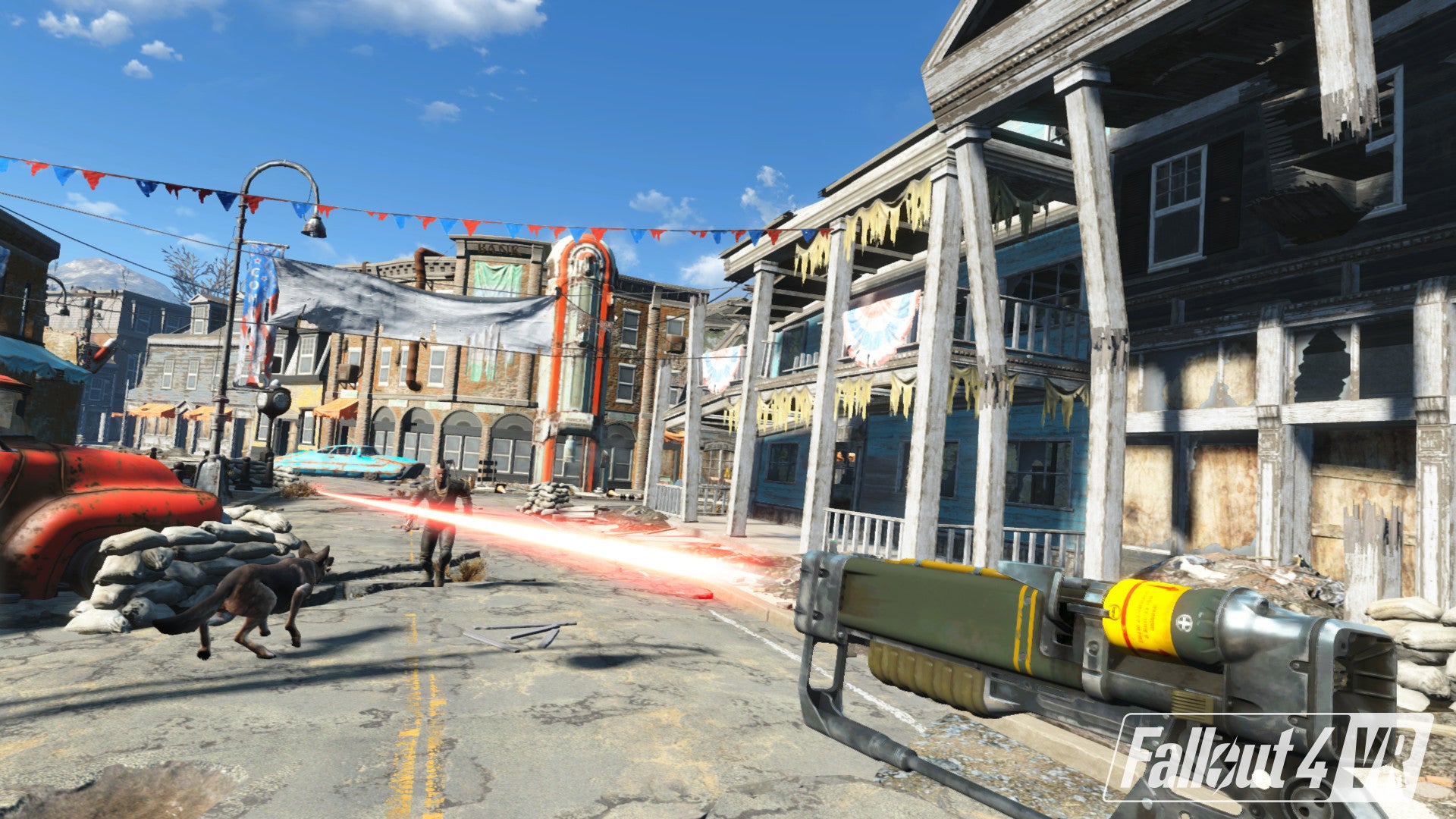 With over 50 unique weapons rendered in VR, you’ll be forgiven for spending a lot of time standing still, looking at your own hands

A Sense of Position

There’s no question that VR prioritises immersion and the potential to make player feel more ‘present’. As a result, there is great demand for VR audio to effectively place the player within the virtual world – and one of the best ways of doing this is with a convincing 3D soundscape. Fallout 4 VR uses a positional (3D) audio engine that generally does an effective job of localising objects around you. Even on basic in-ear stereo headphones there is a clear distinction in sound position. As you physically look around, hearing the bark of faithful canine companion ‘Dogmeat’ moves smoothly between your left and right ear, giving a dramatic effect of his position – and your relative position – in the wasteland.

There are however a few issues. Firstly, the virtual acoustics are very reverberant, meaning the sound of enemy bullets ricochets off multiple surfaces before you even know a shot’s been fired. This makes determining an enemy’s location from the sound of their gunfire very difficult and you are forced to throw your head around in every direction to visually locate them. Secondly, the positional audio is good on the horizontal plane (left to right) but pretty poor on the vertical. The effect of this is that enemies above or below you are particularly difficult to place using only your ears. Another issue is that when you enter a conversation, even though the visual position doesn’t change (unlike in non-VR Fallout 4, where you enter an interactive cutscene) the 3D effect on character voices stops working and you hear their dialogue more as if it was coming from within your own head.

Positional audio doesn’t extend to either your Pip-Boy 3000 menu interface or any of your weapons. Hold your weapon out to one side and there is absolutely no change to the balance of the gunshot or laser blast as you pull the trigger. For the Pip-Boy this isn’t too much of a problem as the screen doesn’t light up unless you are looking directly at it. That said, one missed opportunity in making the Pip-boy audio 3D, was how its sound could have become more deeply integrated into the world. The best example of this is with the radio stations. In the narrative, the radio broadcasts are emitted from the Pip-Boy, so it would make sense in VR that you could wave your left arm around and the positional sound of the radio would change accordingly. This could have been incredibly immersive and even tied into gameplay, by you needing to consider having the radio on whilst trying to be stealthy. After all, why is it that having your Pip-Boy light on alerts enemies to your position, yet you can somehow blast out ‘Butcher Pete’ at top volume without drawing any attention whatsoever?

For the most part, what works in Fallout 4 works equally well in its VR offspring. The overall balance of the wasteland soundscape is really well optimised and the audio is generally very clear without requiring you to listen at uncomfortably high volumes – a notable achievement for a game with such a detailed soundscape. Despite being difficult to navigate using motion controllers, The Pip-Boy audio interface does a good job of differentiating various navigation moves, so once you’re used to the controls, navigating the various stat screens is just about manageable.

When teleporting however, your footstep sounds often lag behind and continue to play even when you’re not moving. This becomes very confusing and it is easy to confuse this glitch with enemy footsteps. When swimming, using the motion controllers to make natural swimming actions is a great touch. Unfortunately the audio feedback is unresponsive to the speed or frequency of your arm movement, creating a mismatch between audio and graphics. Another issue arises for players who prefer melee over gunplay. Regardless of the weapon you’re using, there is no audio feedback when swinging. Another missed opportunity, as swinging a Shishkebab and hearing the flames dance around you, would have been pretty awesome.

The chances are you’re using headphones

The sonic world of Fallout 4’s Commonwealth Wasteland is a wonderful one. Experiencing it in VR is likely to encourage most players to double-down on the immersion factor by using headphones, which does raise a few unique changes.

The main change is that everything becomes more intimate. NPC voices feel closer. Whilst indoors, the sounds of enemies around a corner feels more claustrophobic. When a mutant hound begins bearing down on you before you’ve even had a chance to see it, the experience is all the more urgent and buying antibiotics online legal intense. The downside of headphone listening is that any source of repetition can become more noticeable and begin to grate on your patience more quickly. Bethesda certainly improved upon Fallout 3 with a greater variety of voice actors for their incidental characters. Unfortunately it isn’t quite enough and, at times, hearing the same line of dialogue with the same voice and intonation (but from a supposed different character) detracts from the otherwise excellent atmosphere. Repeating songs on the various radio stations is also that little bit more irritating when listening on headphones. That said, the efforts to include more variety within each station and the inclusion of a Classical repertoire makes a big difference (merrily hacking raiders’ limbs to the tune of Holst’s Mars, is pretty joyous).

To sum up, it is clear that the audio within Fallout 4 VR suffers slightly (as does the rest of the game) from essentially being a VR port. Building the system from the ground up would almost certainly have addressed many of the issues above. Of course such points are relatively minor and there are certainly more than a few made-for-VR games that present much poorer audio by comparison. My humble advice to all potential Wasteland Wanderers out there is: be patient, focus on the positives and let it take you away. It will. I have it setup in my office at work and I’m honestly not sure if I’m ever going to go back actually doing my job. 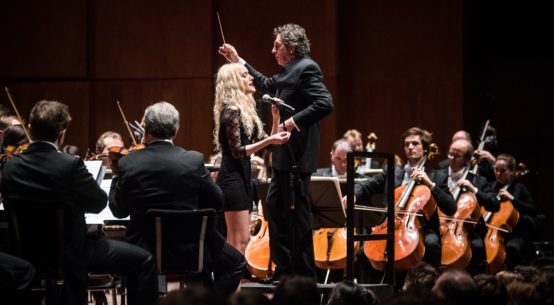