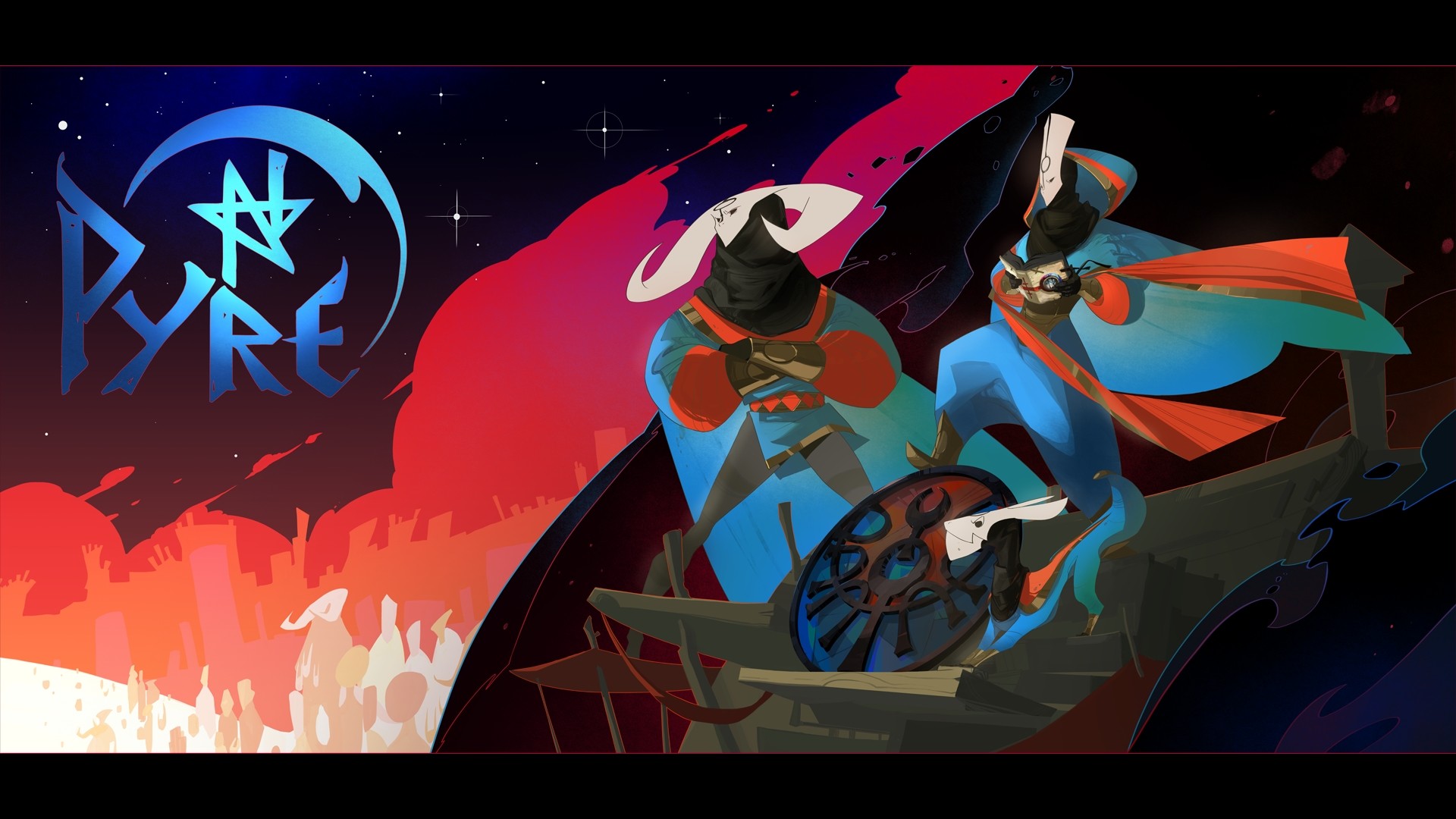 Following Bastion and Transistor, Supergiant Games’ third game, Pyre, is an unexpected change of direction for the well-respected indie studio. In Pyre, you are a ‘Reader’ – one of the remaining few that can understand what is written in the mystical ‘Book of Rites’. You navigate the world in a rickety wagon with your team of outcasts by studying the stars and travelling to various locations to perform ‘Rites’ to earn your freedom.

Unlike Bastion and Transistor, which are both typically combat-focused RPGs, Pyre gives much more focus to narrative and relies on point-and-click features with dialogue (written, rather than spoken) to build characters’ back stories and move the game forward.

To complement the unusual dynamics of this game, the music from Composer and Audio Director Darren Korb is wonderfully varied and the sound effects, while realistic in style, really add to the beautiful hand-drawn environment and character art. 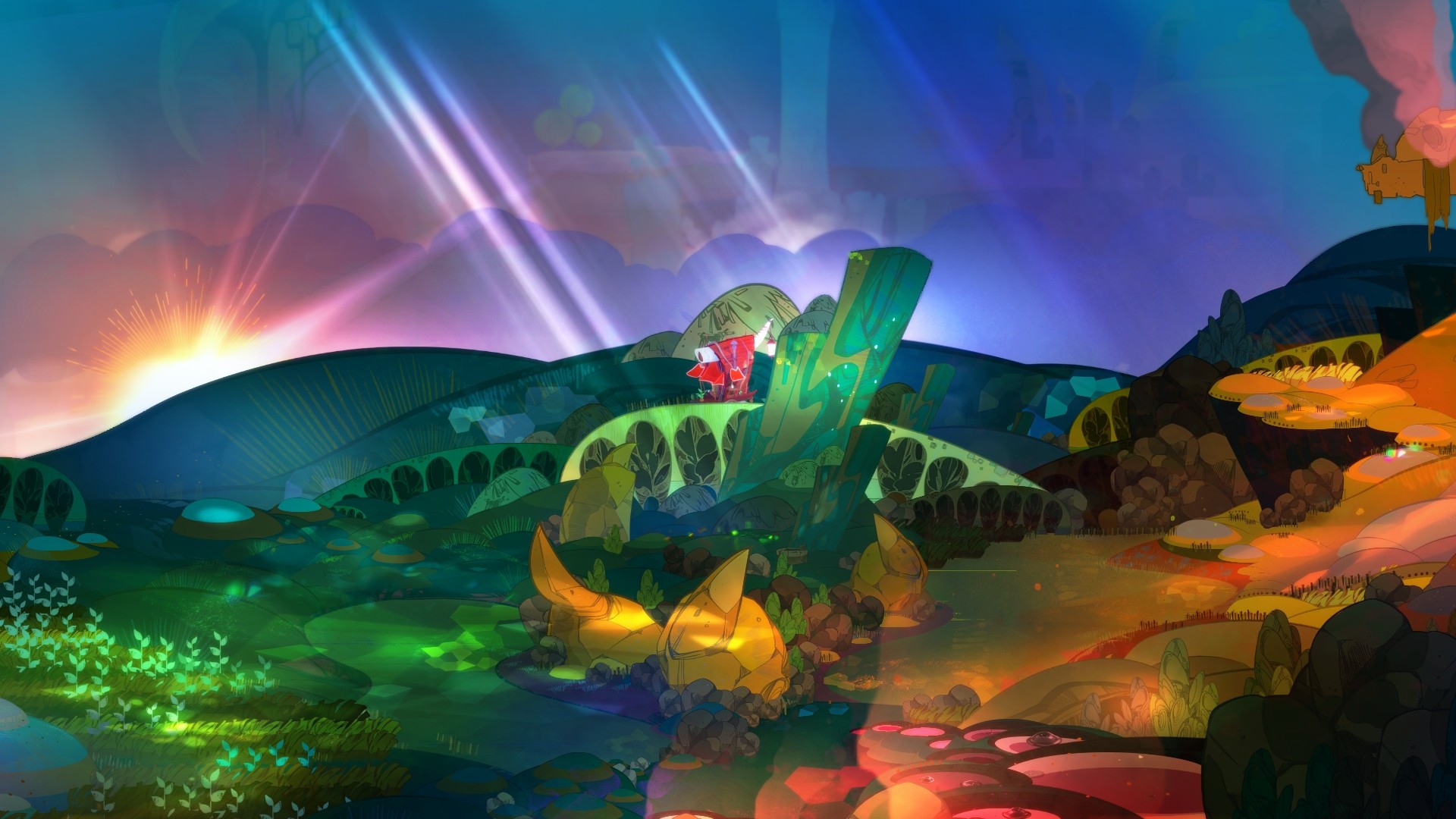 The music features a large variety of plucked string instruments, mainly acoustic, but also electric guitar, mandolin, harpsichord, banjo, and pizzicato strings. There are a great range of genres from a solo baroque harpsichord prelude in “Life Sentence” (reminiscent of Final Fantasy 9), through some solid thrash metal in “Thrash Pack“, and even including some synthwave in “The Blackwagon“. Most pieces in the soundtrack are full length tracks (around 3 minutes), so when you hear them in the game, it doesn’t make you feel fatigued. This is a good thing particularly when some of the dialogue passages are long.

To keep the music fresh during these lengthy sections of backstory, there is a nice use of layering. From the way the music reacted when I was playing, it feels like the layer changes are triggered by where you are in the dialogue which ensures the layers are dynamic and flexible.

An example of this is during the first few scenes when you are welcomed in to the wagon; the guitar melody track drops out, while the bassline and rhythm tracks continue in the background, allowing the dialogue to sit in the mix comfortably. When you finish that conversation, and pick up the Book of Rites for the first time, the guitar melody re-enters but this time it is being played on a sitar-like synth and a mandolin. This makes you aware of the change, but also makes it feel like this is a new version of the music, stopping the loops from becoming stale.

Another interesting approach in the music implementation is as you reach your destination and the wagon comes to a stop. Rather than just fading out, the music slows and ends with a cadence, bringing an end to the track and also the current chapter of the journey. This aids the story-telling and helps feed in to the theme of the Reader and the Book and the visual-novel style of the game. 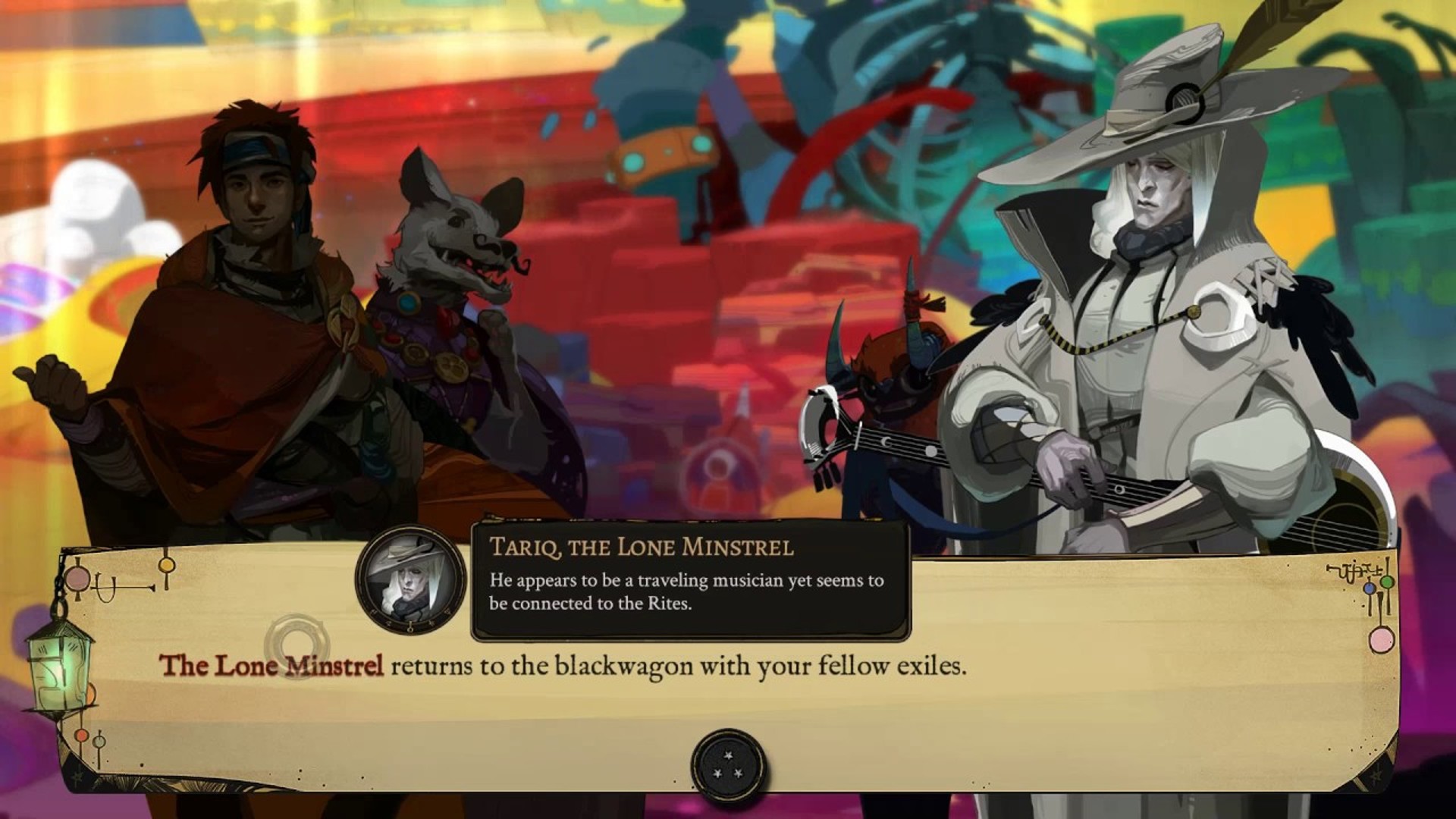 My favourite thing about the music in Pyre is the incorporation of Tariq the Minstrel. Tariq is an enigmatic figure who seems to know a lot more than he lets on. For the first hour or so of the game he sits silently hunched in the back corner of the wagon and does not communicate with anyone. As the game progresses, the Minstrel’s jukebox is unlocked, allowing us to choose a solo acoustic guitar version of any of the tracks that we have heard so far. I really liked this feature a lot, as it puts a spotlight on the score and gives us as the player the opportunity to enjoy the music in any order.

In addition to the instrumental music, we are treated to some songs from the Minstrel (sung by Korb) at poignant points along the journey. For example, “Vagrant Song” as we sail across the Sea of Solis. I thought it was a great surprise to hear vocals after such a long time in the game without any understandable dialogue. I also feel like the unexpected switch to an in-game character playing some music, rather than non-diegetic score that we are used to up to this point in the game was really innovative, and not something that happens in games as often as it should.

The sound design in Pyre is mainly realistic in style and is used to set the surroundings and complement the music, rather than blow your socks off. Things like the creaking of the wagon, straining ropes, the spinning of the wagon wheels as they turn all help to make the animations between map areas more interesting, and make the wagon almost like a cute character of its own, especially when it does a little hop off of the edge of the map and in to the next area with a little whoosh sound.

I found that being inside the wagon, just messing around was where a lot of the fun happens. Using the point-and-click mechanic, you can click anywhere on the inside of the wagon and there is a great array of sfx that you can trigger. You can knock on the walls, tap on the fish tank, blow away some cobwebs and even poke the little drive imps, that sleep in the roof when they have finished pulling the wagon all day – they give off a funny little grunt that never gets old.

Although this is not important to the gameplay, little things like this are the parts that you remember – like pulling Mario’s moustache in Mario 64 during the loading screen. On top of this, the sfx had been implemented in FMOD to have some random round-robin picking and some pitch randomisation just to keep them interesting and fun. One particular favourite bit is if you ring the nautical bell too many times when it’s not dinner time, Rukey REALLY doesn’t like it!

SuperGiant Games are known for their unconventional use of narration in their games. Bastion had the continual voiceover dictating your moves as you made them, whereas in Transistor the narrator speaks directly to Red as you control her. And while Pyre again has a narrator, you get the sense that he is not on your side.

I found the way that dialogue was approached in Pyre quite interesting, because while this game is heavily focused on story-telling, understandable language is barely used at all. Most of the dialogue in this game is an invented language, so what you read in the dialogue boxes is actually nothing close to what you hear as the characters speak. Use of English is reserved for the narrator and a few select important characters at key moments.

In order for the nonsensical dialogue to be effective, the voiceover work had to be top notch. Even though you have no idea what the characters are saying just by listening, the emotion and the tone in the voices are timed and pitched perfectly so that the sounds that you hear reinforce what you are reading. This is taken to the max with the character Tizo, a little imp, who, unless you hover over the text of his little screeches of “skreeeeeeee-kii” you don’t get an explanation of what he is saying, however you still have a sense of what he means because of his intonation.

Because of the 2d art, there is no spatialisation of the dialogue in terms of distance, however the voices are panned left and right according to the character’s position on the screen, which is just a nice touch that separates the dialogue from the music. 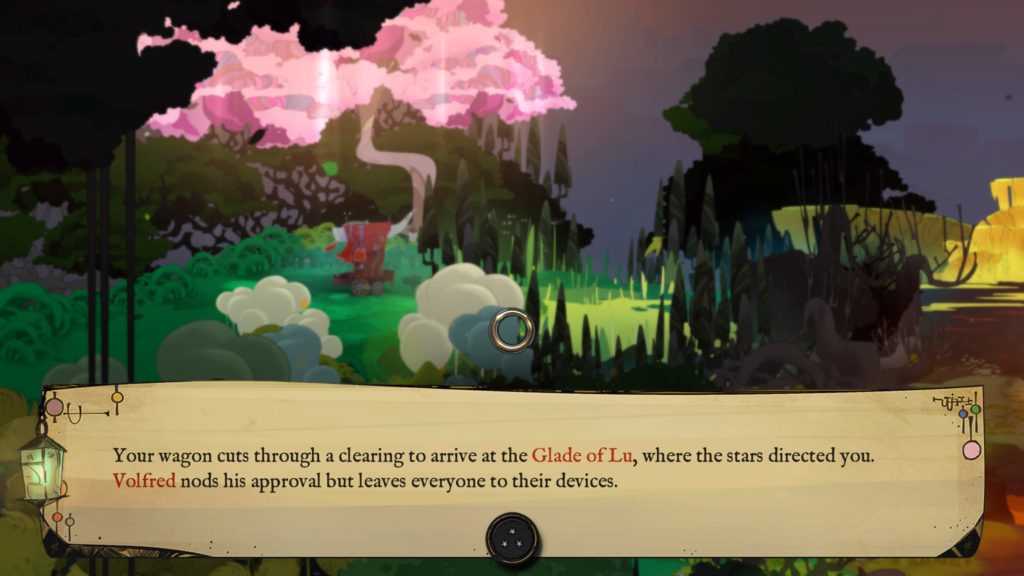 Overall Darren Korb has scored a blinder with this soundtrack, and I am looking forward to listening to the OST for many weeks to come. The mixture of genres in the music keeps you interested and anticipating your arrival in new areas as the game progresses. The sound design is understated but fits very well with the overall aesthetic of the game and buy ambien hong kong I really enjoyed messing about with the point-and-click mechanic that makes Pyre feel nostalgic, which makes me very fond of it. The ingenious combination of English and nonsensical dialogue made what could be quite a tediously large amount of text in to something that was more engaging and that held a few pleasant surprises.

While Pyre has been received as a bit of a turn up for the books from SuperGiant Games, I found it a really lovely surprise. It is one those games where instead of the audio simply reinforcing the gameplay, it has instead brought a whole level of enjoyment, and it is one of the main things that will keep me playing the game.

Pyre is available now on Steam for £14.99, and you can buy the soundtrack either bundled with the game for an additional £7 or on its own through SuperGiant Games’ Bandcamp page for $9.99USD. 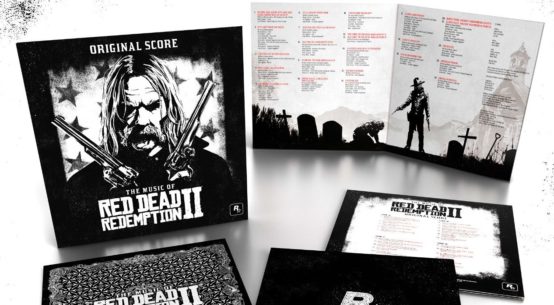 A Red Dead Original Score that Nobody Wants to Miss