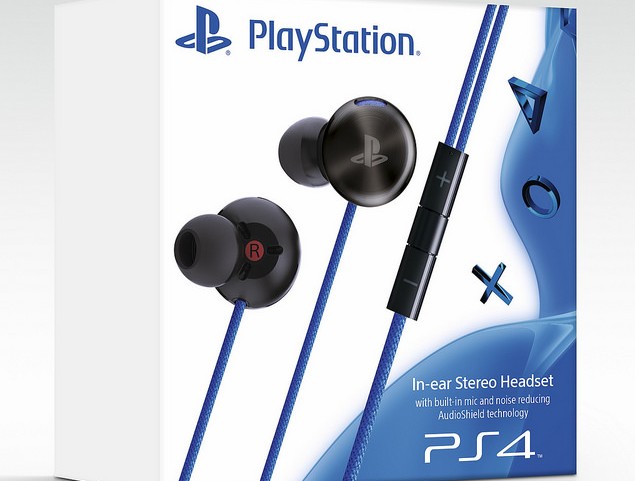 So a new headset has appeared from Sony Computer Entertainment Europe (SCEE). They announced today that their brand new In-ear Stereo Headset for PlayStation(R)4 (PS4(TM)) will be arriving on 4th December in the UK.

The headset is available at a recommended retail price of GBP 77.99 and is compatible with a range of devices, including PS4, PS Vita, smartphones and tablets.

This wired In-ear Stereo headset features noise reducing AudioShield technology, which I’ve never heard of before. Apparently it restricts unwanted sound from the environment around you – but I’ve heard that before.

According to Sony we “Simply power up the AudioShield to experience increased immersion as you go deeper into the game-world, and enjoy flawless, uninterrupted audio every time you listen to music.” so here’s hoping it is simple. For the steep price it better be good!

The headset also has approximately 15 hours of rechargeable battery for the noise reducing feature, which can be charged via the USB cable included within the box. This is a handy amount of battery life and I like that it’s rechargeable.

The In-ear Stereo Headset includes a built-in microphone for chatting with friends on PS4 and can also be used for taking calls on smartphones and tablets. In addition, the headset includes an In-line call button and +/- volume buttons for easy control of your audio. These features are a must these days but all the same still glad to have them there.

With small, medium and large interchangeable ear-tips included and 13mm speakers producing deep bass audio; the In-ear Stereo Headset plugs directly into the DUALSHOCK(R)4 Wireless Controller, as well as other standard headphone jacks, making it the ideal companion for all of your audio needs on any device, including PS4, PlayStation(R)Vita, smartphone or tablet.

A pouch is also included within the box, to store and carry the headset when not in use.

As for whether this headset will be worth purchasing we can’t say for sure yet but I think nearly 80 quid is quite steep for in-ear headphones, but if they’re high quality maybe so! Though I’m still bitter about the terrible and painful headset that came with the PS4, why Sony!?

The In-ear Stereo Headset will be available on 4th December 2015. For more information visit http://blog.eu.playstation.com/.