We Happy Few is an action adventure game developed by Compulsion Games; a 40-person company situated in Montreal and recently acquired by Microsoft. Set in an alternate-reality 1964, in which Germany won World War II, We Happy Few tells the tale of various characters, all fighting for survival in a dystopian English city.

The music for We Happy Few is a substantial part of the game and contains a staggering 48 tracks of music. It was composed by Nicolas Marquis; a Canadian composer who previously worked on Jurassic World Alive, Contrast (a previous release from Compulsion Games), Army of Two, and various other titles, as well as numerous films and TV shows. With quite an eclectic catalogue to his name, I was interested to hear what he would bring to the world of We Happy Few. As it turns out, Marquis has crafted a wonderful score that sits seamlessly within the game’s environment from the first loading screen.

With an abstract and almost atonal vibe in places, the score for We Happy Few veers through a wild palette of emotions. On many occasions, it feels almost disconcerting to listen to – giving you a set rhythm or pace but no core melodies to really ground things; which in many ways is reflective of the game’s narrative. Marquis uses a befitting instrumentation for this soundtrack, with tracks largely utilising synths, guitar, organ, and piano. Instrumental timbres are complimented by a miscellany of sound design elements, such as metallic hits, scrapes, abstract uses of the more tonal instruments, reverberant stings, and more. Production quality is excellent throughout and tracks like “Dead Chuffed” have sinister The Sims undertones. The game’s main menu track, “Welcome to Wellington Wells”, evokes this feeling notably well and was a particular favourite of mine.

Throughout the game, the music is subtly weaved into the scene, surfacing only when necessary. On some occasions however, it crops up when you least expect it, such as during the loading screens between chapters. For many games, loading screens are silent to preserve memory for the content that is loading, but We Happy Few has some aptly crafted ‘elevator-style’ music to help keep the player immersed during down-time. That being said, some of the underscore is almost constant, with ambient synths and piano playing even whilst you are simply walking around. This is an efficient way of filling the soundscape and it also supports gameplay, with a specific underscore theme present in each major location; providing helpful sonic guidance as you explore. That said, the overall sound experience would have benefited from a few moments where only the sound design was present. This would have arguably evoked a greater sense of unease and isolation, whilst also emphasising the realism that little bit more.

The combat music always sets a fantastic tension and deftly raises the hairs upon the back of the neck. Marquis has done a great job at crafting a score that is tonally and melodically bold and unique, but also pleasantly subtle; effectively supporting the scene and signifying changes in the game’s events, without bombarding you with sound.

As well as the score, you will also come across televisions, radios and old-timey gramophones that play diegetic music throughout the game. There are various vinyls scattered about the world that, once discovered, you can use to play certain tracks from the score. This mechanic is not merely decorative, but is cleverly integrated into gameplay, as you can use the vinyls as a means of diverting the guards’ attention whilst sneaking around.

Using music to blur the lines between the game world and the real world is very befitting, considering the themes of the game. Another example of this is in the featured ‘in-game’ band Nick Lightbearer and The Make Believes; a fictional group comprising of (in the real world!) Murray A. Lightburn (lead vocals, guitar, bass), Brad Barr (lead vocals, guitar), Andrew Barr (drums, percussion, backing vocals), and Patrick Watson (lead vocals, keyboards). The Make Believes and are themselves tied into the game narrative whilst also providing 6 fantastic swinging ’60s tracks that appear throughout the game.

The sound design in the game follows a fairly subtle course, never being too obtrusive on the rest of the soundscape. The majority of sounds are quite delicate in their design and position within mix; present enough for you to aurally monitor what is going on but not too distracting or overwhelming. I particularly enjoyed the UI in this regard. It has several nice touches, such as the musical tones that play as you navigate your skill tree. Other elements also possess a mild ‘Bioshockian‘ vibe with sounds of locks and clunking mechanisms when you select your options. The sound that plays when a new objective appears is also worth a special mention.

One small qualm was that I would have liked to have heard a bit more variation in some of the recurring sound effects, such as when you pick up items, search objects, pull out a weapon, and so on. Although a sense of familiarity is formed when there is one set sound, it can be a little fatiguing when having to repeat actions regularly. I experienced this with a particular bird ambience, the exact same sample for which I heard every time I wandered outside during the day. That said, other sounds such as melee hits do present a randomised selection of sounds, so any limited variety in other areas is most likely more of a system memory restriction than a creative choice.

The sound of the rainfall is particularly pleasant and various other ambient sounds that play as you explore dilapidated buildings (such as the use of spot effects for debris crumbling and lights with electricity crackling) help to sell the experience even more. Environments in general are mostly well-portrayed throughout the game in terms of their sound design. I particularly enjoyed the theatre scene with Uncle Jack’s video screening.

Well worth a look in We Happy Few, is the behind the scenes content the developer published, discussing the audio for the game. Compulsion Games ran a series of developer updates, highlights, funny moments and more on YouTube throughout their development process. These covered several disciplines including art, animation, programming, level design, and more, as well as audio. My favourite of these is the behind-the-scenes of their recording process of the trailer foley, which was published on Gearbox‘s channel as well as a behind the scenes of recording some of the voice actors and creating a procedural music system.

The voice acting is where this game truly shines, with its breadth of characters, authenticity of accents, well chosen scripting and so much more. I quickly developed an affinity for my main character, Arthur Ernest, as well as the majority of the characters I met along the way. This was largely due to their distinct and characterful voices. With the game world being procedurally generated, once your character dies, that’s it, and you start fresh with a new character. For me (despite a few close encounters), Arthur remained very much alive, and so I can only really comment on his voice. There are however two other playable characters (Sally and Ollie) and additional characters are due to be added in further updates.

Despite my want for a bit of variety in the sound effects, I was delighted to hear such extensive variety in the dialogue. Arthur has a frequent habit of talking to himself and narrating what he is thinking or what is happening in the moment. This is something that’s done by several games but can quickly become stale or irritating if your character has a repeating cycle of only a few lines. In We Happy Few, Compulsion Games have gone the extra mile to record a strong catalogue of dialogue lines so that you rarely feel as though you are hearing the same thing twice. As such, Arthur’s little mutterings are natural, humorous and feel like a genuine extension of his character.

Most of the cinematics and flashbacks in game thrive on good voice acting, particularly the flashbacks as these are often built upon conversations from your character’s past. One small criticism is that I did experience the occasional delay when the voices were triggering as I entered conversations or cinematics. This is often a natural result of the game catching up with itself when loading content, but still break the immersion quite a bit, with  voices also being a little out of sync with the mouth movements. There are also a few moments where voices do not feel appropriately mixed inside the spaces they are in, or where two different characters are conversing within the same space and yet sound like each voice is in a different environment. Nevertheless, the voices themselves are spectacularly performed.

Overall, We Happy Few stands as one of the more unique games that I have played in quite a while. It has such wonderful character and creativity to offer in its design, narrative and (most importantly of course) its sound.

The soundtrack holds a bold identity and its uniqueness is the perfect match for the game’s world. The sound design is equally well-fitting and the stellar vocal performances truly bring the game up a notch in its immersion, coaxing the world into an eerie yet cohesive whole that I found an absolute joy to explore.

We hope you enjoyed Katie and Ryan’s review, check out others in our Reviews section. Don’t forget to sign up to our Monthly Newsletter to make sure you don’t miss out on our reviews and interviews. 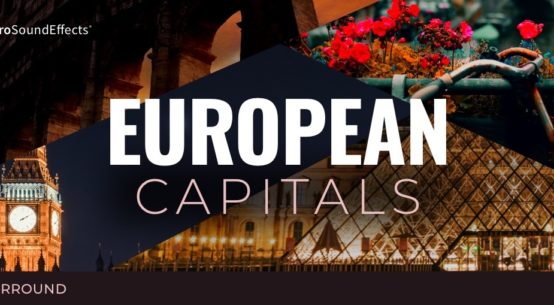