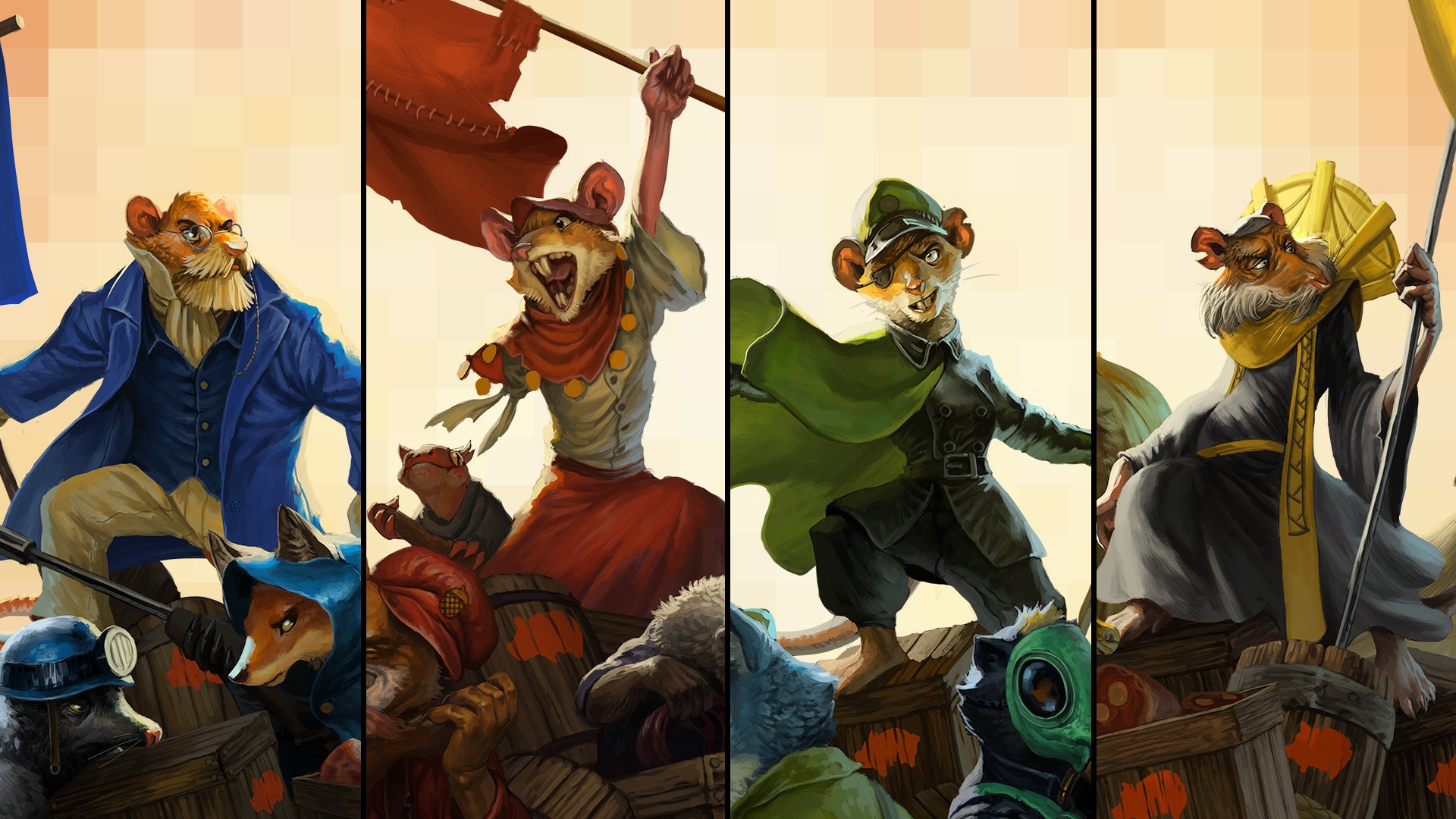 Tooth and Tail from Pocketwatch Games is a super quick real-time strategy game, featuring a raucous and folksy soundtrack from Austin Wintory and superb sound effects from Power Up Audio. A bite-sized strategy game with skirmishes lasting around the 10 minute mark, this is a very different beast to the likes of Command and Conquer or Total War. It is a bit of a revelation for the genre, with only one simple aim: eat or be eaten.

You play as one of four flag bearers representing the four warring factions: the Longcoats, the Commonfolk, the KSR, and the Civilized. The aim is to build and control your armies to ensure victory. Then take your enemies home for dinner – not in a good way.

A competent player can expect roughly 8 hours of play before completing the campaign mode. This is a fairly healthy duration, given the length of the battles, and the multiplayer mode offers a huge array of options for online and offline, including 1v1, 2v2 or even 4-player free for all!

As is always to be expected with a score from Austin Wintory (known for his work on previous Pocketwatch game Monaco, as well as Journey and ABZU), the music for Tooth and Tail features some beautiful idiomatic writing, both in terms of genre and in the various idiosyncrasies of the instruments. Of particular note is Wintory’s use of solo fiddle and nylon string guitars, with a large amount of space and energy presented in the recordings.

Tooth and Tail centres around the theme of revolution, with the Longcoats and the Commonfolk teaming up to bring down the KSR and the dictatorship of the Civilized. Wintory makes great use of this revolutionary theme, particularly in the anthems for each faction, all of which feature drunken male Russian chanting full of the energy of the mess hall. In addition to this, there are character pieces reserved for each faction’s flag bearer: Hopper for the Commonfolk, Bellafide for the Longcoats, the Quartermaster of the KSR, and Archimedes of the Civilized. All of these pieces are imbued with heavy tones of nationalism that bear more than a little resemblance to a few real-life countries.

“Hopper, Flagbearer for the Commonfolk” is full of the hope and energy of revolution. Beginning with a Russian-esque chant, as all of these anthems do, the track then features various plucked string instruments such as zither, guitar, and mandolin, plus a fair bit of percussion. The use of compound time creates a pastoral feel but the piece is also full of little dissonances and an exotic minor 9th Phrygian tonality that give the music a distinctly ‘Soviet’ edge. “Anthem of the Commonfolk” written by Darren Korb (composer for SuperGiant Games – Pyre, Transistor and Bastion) follows this same path, although here we get a strong flavour of Spain with the Albeniz-style guitar writing. Coupled with Korb’s signature mix of synths and electro-rock drums, this makes for a great trip-hop track.

“Bellafide, Firebrand of the Longcoats” has the bassoon leading the melody with pizzicato strings, guitar and percussion supporting. The piece has a strong marching beat but also has something of an oompah feeling about it. This creates a very comical effect when combined with the bassoon. “Bellafide’s Tarantella” is in D Phrygian and features a huge array of woodwinds, courtesy of Kristin Naigus. It’s a quirky and stompy march in 6/8, set off perfectly with rattly percussion to evoke the Southern Italian style.

“The Quartermaster of the KSR” features brass as the main instrument family, with a plodding tuba underpinning the whole arrangement. The KSR appear to be depicted as a stereotyped German force, upholding the façade of success while struggling to maintain order as the revolution unfolds. It’s wonky sort of waltz, more like a drunken colliery band than the powerful force than it should be. It is reminiscent of Ives’ “Country Band”. “The Waltz of the KSR” features some brilliant brass playing from John Robert Matz (composer of Fossil Echo). Here, the swooping French horns, the close harmony in the trombones and the dramatic modulation at the 2 minute mark are all particularly enjoyable.

“Archimedes, Left Hand of the Civilized” is full of pathos and features a solo violin played by Eli Bishop, with a gypsy twang evocative of a romantic cadenza. Big organ chords tell of Archimedes’ cunning and base hunger despite his lofty position among the reining government. Although he is one of the Civilzed and a respected leader, when push comes to shove he will happily devour his enemies – literally. “Archimedes Tango” is full of the bravado of South America. Putting the game aside for a second, this beautiful standalone piece is one that could easily pass for a genuine tango. This level of authenticity within the music is what makes Austin Wintory arguably one of gaming’s most outstanding current composers.

“The Old South Distillery”, which we hear in the main menu on startup, is a great introduction to the flavour of this game. Although the instrumentation is simple (just a solo piano), the choice of harmony (a mixture of blues and a sinister Locrian modal sound) and the tone of the piano are what gives it the distinct Tooth and Tail character. The inclusion of some plucked piano sounds in the lower register are especially compelling.

In skirmishes, the sound effects are fairly thin on the ground, only triggered on an action such as building or attacking. This is pretty standard for an RTS. When they are triggered however, they do pack a punch! As with the music, there is mixture of comedy and action in the sound design that fits the style of Tooth and Tail perfectly. By contrasting the bad-ass sounds of the flamethrower carried by the powered up Boar, or the mini-gun held by the escapee Badger, against the put-put guns of the Distillery Brother squirrels, the mix is filled out really well and is pretty damn funny.

Footsteps and weather sounds create a decent bed as you would expect. Musical stingers and interface sounds are implemented nicely, especially in the menus which bring you in to the world of the game before you even begin to play. In fact, the menu sounds are absolutely killer – huge wooden impacts with really quick attacks and short tails that give everything a very satisfying crunch! The building sounds are also particularly enjoyable, a personal favourite being when a bullet hive is built and a bubbly plastic, pointy metallic pop can be heard as the hive appears out of the ground.

In the campaign mode, the ambiences are a genuinely lovely addition for filling out the time where you are exploring each faction’s base and looking for the next mission. At the bar in the Longcoat’s warren, you can see the squirrels all having a drink and feasting on the bodies of their most recent buy brand name ativan fallen enemies. To complement this, there is some great, thick, rodent-like walla and clinking of glasses with plenty of variation to prick your ears up, even after 3-4 minutes of standing still (yes, I tested it). For an example, see the video clip below, where Kevin Regamey from Power Up Audio gives us the performance of his career, as a drunken squirrel. The sounds are also placed really well in the level, fading as you go through a doorway, making only the most rowdy of ferrets audible when you are in the next room.

Unwittingly, it seems that all the games that I choose to play and review feature nonsensical dialogue. Similar to SuperGiant Games’ Pyre, Tooth and Tail uses subtitles to convey meaning, which is preferable as it leaves the audio of the dialogue open to have some real fun with. The different pseudo-accents for each flag bearer are perfect for revealing little clues as to the personality of each character. It also saves the voice actors and the (often overlooked) dialogue implementers a huge break from recording, editing and placing thousands of lines manually!

Personally, I’m not a fan of RTS games in general. They tend to be too bulky and time-consuming for me. However, if you have a thirst for revolution, are time-poor like me and you want to hear some genuinely original music and entertaining sound design, give Tooth and Tail a go – it’s a corker.