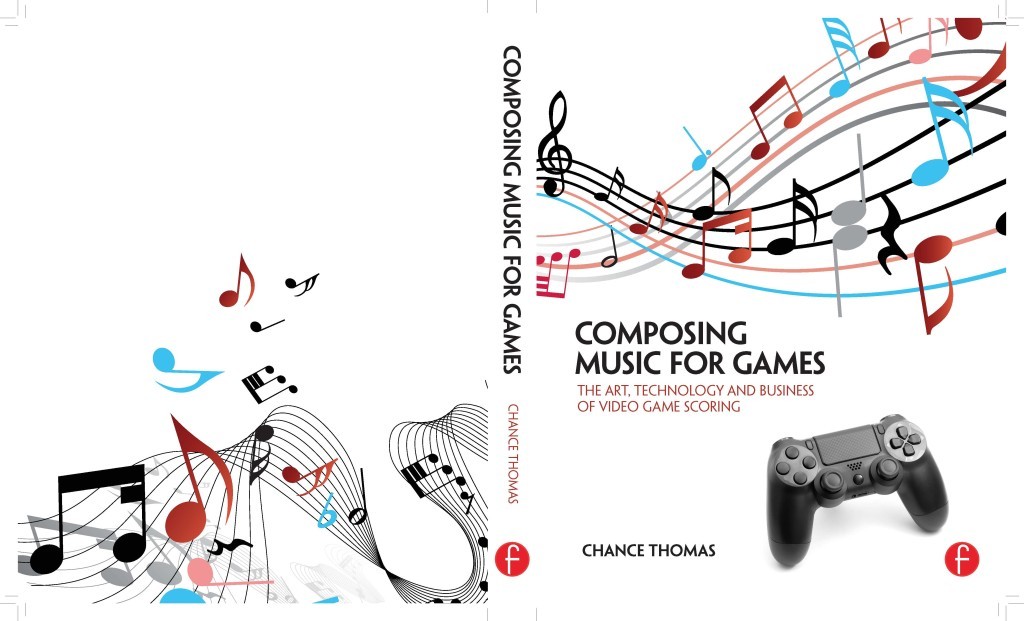 I love reading material and I eagerly anticipated getting stuck into Composing Music for Games by Chance Thomas.

Now there are many different mediums where information, guidance or education can be distributed in the world. A simple YouTube search on how to peel a potato will generate a hundred different interpretations of how a potato should be peeled.

My analogy isn’t just a way to waste words in this article, but you can go around the world wide-web and find a ton of help, education, guidance or tips on composing music too.

I prefer to educate myself with the odd YouTube video, having a general hands-on approach learning from my own mistakes and reading. My large library of reference material has just had it’s latest addition which is a one-stop shop based on composing music for video games. So let’s discuss the book.

Chance Thomas is not just your “average Joe” guy who hands out advice over the internet. Including scoring Academy Award winning shorts, Emmy nominations and undertaking roles such as Musical Director for hugely successful franchises of the Tolkien variety, Thomas is also a very skilled and hugely talented composer. He is the kind of mentor who’s credits alone carry a large weight of their own. 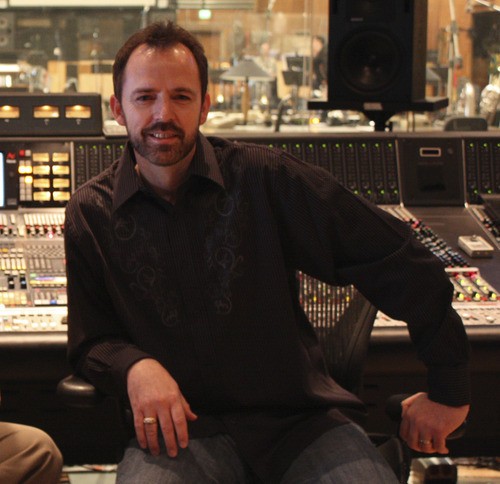 From large franchises such as Dota, Lord of the Rings, Avatar and Marvel you can be pretty safe in the knowledge that he’s experienced enough to at least know what he’s talking about. Offering a sense of reassurance to the reader of his literature.

Thomas has also cut his teeth composing for TV, advertising and film which gives a good notion that he has plenty of comparable experience to be able to reflect on when discussing scoring for video games.

So that’s that, without knowing the man personally, I already have a sense of security in his words and opinions.

One of the struggles that one could face when sitting with a book, of non-fictional design, is that it can become a strain on the brain. Especially when in this case you have circa 350 pages of knowledge and advice to read through. However, let’s talk in terms of layout.

The text itself is easy to read and inoffensive in it’s font. The English that Thomas uses is also articulate yet easy to read. I’m lucky enough to be a well-read person, but even those of us in the creative industry that find it hard to comprehend advanced terminology without the use of a thesaurus, will still be able to grasp the language efficiently.

Information is clearly laid out in bite-sizes sections which makes it easy to break away and return to. There’s no dribbling of sentences to draw-out a paragraph and headers are clearly marked with their intention.

At the sides of many pages are also smaller sections such as “Peek behind the curtain” which offer an insight into say, how Thomas may have recorded in a large studio, or how he has approached certain objectives and obstacles in his career, from technological subjects to business matters. We are also treated to “Guest Lectures” which compile many excerpts of other composers, sound designers, audio directors and many other roles’ interviews from around the world. These are carefully placed to fall in line with the current subject of the chapter. 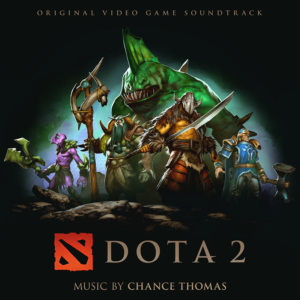 For example, in the section focusing on music production, a guest lecture with Paul Taylor (Rift, LotR: Online, Dead Space) offers an insight into how he approaches his work when composers require their pieces turning into actual scores for instrumentalists in the orchestra. I especially enjoy these “guest lectures” as a large number of them do not hold bias towards the author or the book either. Some are taken form other sources around the web to create additional, informative content for the book.

Each chapter carefully ends with the references to accompany where the source material or information was grown so that readers may pursue further into that particular topic. Opening up a tireless amount of possibilities when it comes to expanding on the already huge amount of content offered in the book. It’s great that a lot of the extra “guest” information or advice comes from more of my favourite people working in the industry today.

Thomas also offers expanded learning, which took me by surprise to begin with. Most chapters end with applied learning modules for you to expand even further on the education. These also coincide with each other. So for example, in one chapter if you are asked to create a 30-60 second mock-up of an action cue, you may be asked to apply this later in the book to create a loop when discussing looping music. I have tested a number of these applied learning methods and to be honest, had a ton of fun, venturing slightly out of my comfort zone, which is perfect for any creative individual.

The applied learning is not always about creating music, it could be about analysing certain scores or compiling lists of themes to refer back to later in the book.

The enjoyment comes from turning a standard paperback book into a more comprehensive, inclusive educational tool which adds much more in terms of interactivity. And what else would you expect? Video game music is one of the most interactive mediums across the entertainment industry today.

Now there are many practises a composer will know how to approach and some they will not. Coming from the background I have, I understand finances, business relationships and taxes. In

comparison to a lot of “self help” you may find on the internet, Thomas doesn’t just say “you could use a credit card”. He explains that in the early stages of attempting to define your business outgoings a credit card may be useful to monitor spending. It’s also helpful to have a separate statement for business expenditure. He doesn’t just discuss how loops are a tool, he discusses the technicalities of how to create them, how to mix them, how to write letters, how to approach contacts, how to think in terms of an audio director, how to understand a video game production map.

There’s an abundance of information which delves very deep into the pocket of it’s subject. From crafting musical composition to its implementation into a video game using audio middleware, Thomas doesn’t just explain what it is, he explains its process and results.

There’s also a number of items of additional content available via his own website which compliments certain aspects of the book in terms of audio and visual examples of his subjects. Another brilliant way of expanding the educational palette and generating more interaction from the reader.

It’s worth noting that whi

le this books offers a very comprehensive and in-depth look into the world of scoring music for video games, it would be very difficult for an individual with no prior knowledge of music or production in general to grasp the ideas within it’s pages. I would not expect someone with no musical experience or training to understand everything in the book. Ideal beneficiaries of Composing Music for Games would be ranging from high school students with some understanding of the fundamental basics of music at the very least, to professional composers already working in the field looking for another perspective into this world. It’s also perfect for composers who are also fans of video games wanting to understand the basics and advanced ideology of video game scoring and it’s technical and entrepreneurial requirements. Chance adds a flavour of personality and references to plenty of useful, nostalgic media examples to aid in his articulation and point.
One item missing from the book was a glossary, explaining terminology. This is partly my reason for this book being aimed at someone with at least a few musical chops. A basic understanding of musical and potentially technical terminology is required to grasp the ideas of the book. So if you don’t know the differences between a transient and a tempo, this book might not be quite for you just yet. However that’s not to say that it won’t become a useful addition to your information library at some point in your early career as a video game composer.

The entire book is meticulously well-referenced, allowing the reader to further expand their learning by following links to other literature and online material which offers a large resource to an already deep pool of information. It could even serve as a higher education example of reference material in high schools, colleges and so on.

I have personally enjoyed reading this book, thoroughly. Thomas’ friendly, yet well-articulated wording, with the additional sprinkling of humour, adds a great flavour to an already well-balanced recipe of information pertaining to the creation of music for video games and it’s surrounding topics.

There’s more than enough professional and personal references to add substance to this information making it a reliable yet relatable resource to anyone considering or already working within the field of composing music for video games.

Whilst the links in a digital or PDF version of the book are useful, I would highly recommend the paperback copy to have in your reference library at hand whenever you need it. It acts a great reason to leave the seat of your studio and educate yourself further without the distraction of an electronic device.

To return to my potato analogy; Chance Thomas doesn’t just tell you how to peel one. He explains in detail how they are grown, washed, peeled, and added to a plethora of recipes with solid reasoning and explanation.

I, for one know that Composing Music for Games will sit in my reference library for a large part of my video game music career.

You can grab your own copy direct from CRC Press here or via your own online or local retailer.